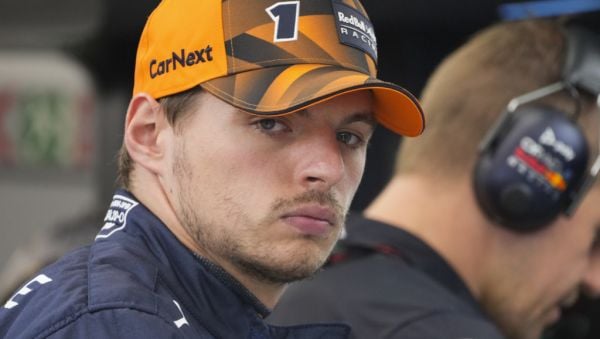 In drying conditions, Verstappen, who has his first shot of securing back-to-back titles, appeared to be on course to take pole with his final throw of the dice.

But the Red Bull driver was under instruction from his team to abort his final lap, and he will start Sunday’s race way down the order.

Sergio Perez took second in the other Red Bull, with Lewis Hamilton third.

Verstappen will be crowned champion if he wins and sets the fastest lap, and team-mate Perez and Ferrari’s Leclerc finish lower than fourth and eighth respectively.

But the Dutch driver, who holds a 116-point lead, faces an improbable task of taking the championship under the lights of the Marina Bay Circuit given his lowly grid slot.

Hamilton missed out on pole by just 0.054 seconds but the seven-time world champion is set to face further action from the stewards for taking part in qualifying with his nose stud in.

Hamilton wore the offending item of jewellery during practice and was summoned to see the stewards ahead of qualifying.

But the 37-year-old could be seen wearing the piercing as he conducted his post-qualifying interview moments after stepping out of his Mercedes.

Ferrari’s Carlos Sainz qualified fourth for Ferrari, one place ahead of Fernando Alonso. Lando Norris was sixth for McLaren.

It was a Saturday to forget for George Russell after he was eliminated from Q2.

The Englishman has enjoyed an impressive opening season as Hamilton’s team-mate at Mercedes, finishing in the top five at every race he has completed.

But Russell will struggle to keep that impressive record intact after qualifying only 11th.

Alex Albon is back in the cockpit this weekend – three weeks after he suffered respiratory failure and was left on a ventilator following complications from surgery. The London-born driver finished ahead of his soon-to-be-departing team-mate Nicholas Latifi, but was only 19th of the 20 runners.