Days of treading water on planning for Irish unification are over, McDonald says 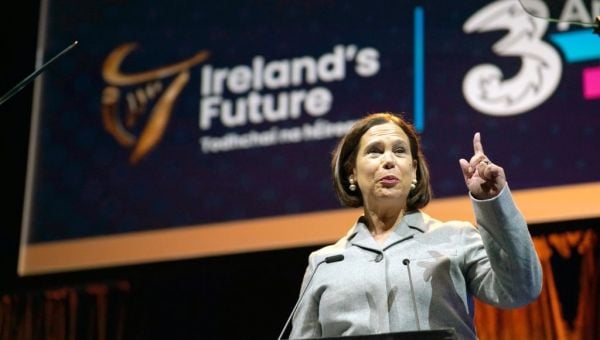 The days of “treading water” on planning for Irish unification are over, Mary Lou McDonald has insisted.

The Sinn Féin president said those who said it was not the time to start preparing for constitutional change had “long lost sight of the bigger picture”.

Creating a new Ireland means building a “home” for everyone on the island, Mrs McDonald added.

Addressing the Ireland’s Future rally in Dublin, the republican leader said partition had resulted in “two conservative and reactionary states” that failed generations of people.

In her speech to the 3Arena, she called for an end to the “them and us” political discourse.

“Ireland’s future will be determined by choices made today, by decisions of this generation,” she said.

“So, the question before us is clear. Do we remain hemmed in by the narrow boundaries of the past, by a dogma that told our parents and grandparents ‘this far and no further’ or do we, together, choose ambition, courage, and the belief that we can build anew?

“Those who say ‘yes, but not now’ have long-lost sight of the bigger picture.”

Mrs McDonald reiterated her call for the Irish government to establish a citizens’ assembly to discuss issues about how a unified Ireland might work.

“The Irish government is represented here today and rightfully so,” she said.

“The days of treading water are over.

“This is a time for leadership. A time for energy and action.

“It is time for the government to establish a Citizen’s Assembly on Irish Unity.

“To urgently plan for constitutional change and unity referendums. Our change must be orderly, democratic, peaceful, and planned.

“Those who seek to guard and defend the status quo have had their day.

“Make no mistake, history is happening now. The challenge is now. The moment is now.

“We are all nation builders. Ireland’s future belongs to us all.

“We can achieve a new Ireland. We can realise the promise of a better tomorrow. Here in our time, we can make Ireland a nation home for everybody.”

Ms McDonald’s address focused on the younger generation, including those who had left the island to live elsewhere.

“I love our young people. They’re great. A generation brimming with compassion, solidarity, and talent. Refusing to be held back by the limitations of the past,” she said.

“Calling out the inequalities in our society. Demanding a better future. Good for them, I say.

“In our young people, we have everything we need to achieve a new Ireland, and we will not tolerate another generation of forced emigration.

“We want our young people to stay where they belong.

“But if you do leave for however long or short, leave knowing that we are determined to build a new Ireland for you to come home to.