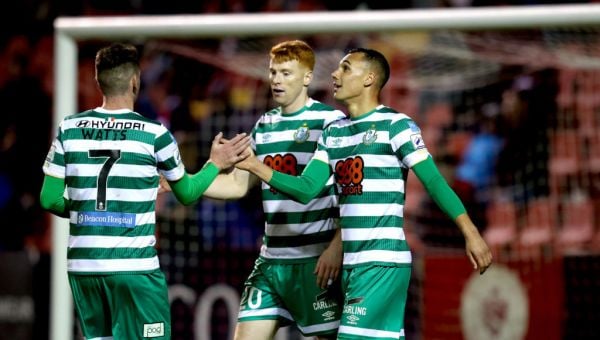 Shamrock Rovers earned a comfortable win away at Sligo Rovers with a 3-0 win.

Goals from Daniel Clearly, Dylan Watts and Graham Burke had Rovers ahead by three goals after 70 minutes before Nando Pijnaker got one back for the hosts.

Taking the 3 points back to the capital ✊ pic.twitter.com/OXyxTKsi9T

West Ham have moved out of the Premier League’s bottom three.

David Moyes’ side beat Wolves 2-0 at the London Stadium.

Gianluca Scamacca scored the opener in the first half, before Jarrod Bowen added a second in the 54th minute.

A Leandro Trossard hat-trick helped Brighton earn a point against Liverpool this afternoon.

Liverpool came from 2-0 down to lead 3-2 before Trossard’s equaliser levelled matters, and it finished 3-3 at Anfield.

Elsewhere, Conor Gallagher scored a late goal for Chelsea in a 2-1 win over Crystal Palace.

Newcastle beat 10-man Fulham 4-1 while Everton were 2-1 winners over Southampton.

Earlier, Arsenal opened up a four point lead at the top.

The Gunners beat Tottenham 3-1 in this afternoon’s north London derby at the Emirates.

It is a level at a goal apiece between Athlone Town and Wexford Youths in the Women’s National League.

While Stephanie Roche’s penalty has handed Peamount a one-nil lead against Bohemians.

DLR Waves were 3-2 winners over Galway.

Celtic remain at the top of the Scottish Premiership after a hard fought 2-1 win against Motherwell.

Rangers thrashed Hearts 4-0 to keep the pressure on their rivals.

Munster have their first win in this season’s United Rugby Championship.

Graham Rowntree’s side overcame the challenge of Zebre by 21- 5 at Musgrave Park.

Richard Mansell has a four-shot lead at the Alfred Dunhill Links Championship in Scotland.

He’s 15-under-par after a five-under 67 at Carnoustie today.

Padraig Harrington and Rory McIlroy are both safely through to tomorrow’s final round on seven-under-par.

But Shane Lowry and Jonathan Caldwell missed the cut, having finished two over and seven over respectively.

Former Footballer of the Year Andy Moran has played his final match for his club Ballaghaderreen.

The Mayo legend scored 3-3 in their relegation play-off win over Davitts in the Mayo Senior Championship.

Moran retired from the inter-county game in 2019 and is now manager of Leitrim.