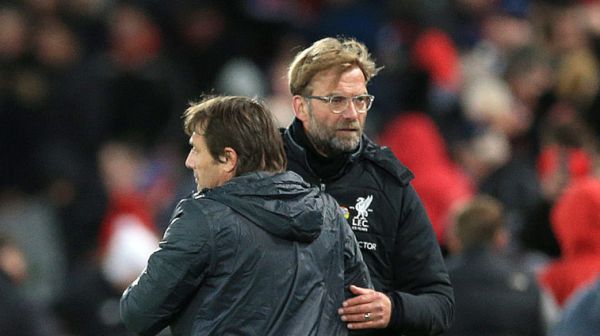 Antonio Conte believes Jurgen Klopp’s patient progress at Liverpool is a good example for Tottenham to follow in the quest to end their trophy drought.

Spurs have not claimed silverware since 2008 despite being among the leading clubs in England for more than a decade.

It was a similar story for Liverpool when Klopp took over seven years ago but even he did not earn instant success at Anfield and had to wait until 2019 – when they beat Tottenham in the Champions League final – to win the first trophy of his tenure at the club.

While the Reds are going through a difficult spell where they have struggled for consistency and sit ninth in the Premier League, Conte knows Sunday’s opponents remain one of the best sides in world football.

He said: “What we know about Liverpool, (they are) one of the best teams in the world. They are having a bit of difficulty this season. I am surprised about this and that some people are trying to criticise Liverpool after what they have done in recent years.

“They have one of the best coaches in the world and fantastic players. At the same time, we have a lot of (injury) problems but we want to play an important game in front of our fans.

“Jurgen’s story speaks for him and he has changed Liverpool. I remember very well Liverpool didn’t win for a long period and he needed four years to bring Liverpool to be able to win again.

“This shows that it is important for a coach to have time. If people don’t know about football, they think that the story of this coach is a winner, it is not so.

“Jurgen shows that through the work, the matches and the transfer market that he improved Liverpool a lot and brought them to the top. For sure I can speak well about Jurgen, Liverpool and the players, they are definitely a good example for us.”

While Conte preached the importance of time and patience, that is not something which has been associated with his managerial career.

The 53-year-old’s longest spell at any of his eight clubs was the three seasons he spent in charge of Juventus.

He did explain, though, what would be key if he was to follow the lead of Klopp and Manchester City manager Pep Guardiola by enjoying an extended stay in England.

“The length of time and the period you stay in one club, it depends on many, many situations not only one or two,” Conte insisted.

“Jurgen found a fantastic place to work and to improve his team. Liverpool in this period invested a lot of money and for this reason the club promised him to invest, to improve the team. The club’s ambition was really high at Liverpool.

“I think so because then I have seen the way they improved, the money they spent in the transfer market and for this reason he is working there seven years. It was like this for Klopp and the same for Pep Guardiola.

“It depends on many situations. If there is a good link and the ambitions are the same, it is easier to stay for a long time in the same club.”

What is certain in the immediate future is Conte will return to the touchline on Sunday after he was forced to sit in the stands during Tuesday’s 2-1 victory at Marseille following his red card against Sporting Lisbon last week.

Get the popcorn out 🍿

The Italian did not enjoy his experience but was thrilled with the unity shown by everyone at the club to help earn a spot in the last 16 of the Champions League.

Conte admitted: “It was terrible, it was terrible honestly. It was really strange also that my place was in the middle of the people, with fans. I think maybe UEFA could find a better situation.

“For every coach, his team is like a son, it’s like my son or daughter, it’s my creation and to see my players in such difficulty was really difficult for me and (to be) unable to help them.

“I want to say thanks to my staff, because they did a really good job between the first and second half, also the players. They showed great unity.”