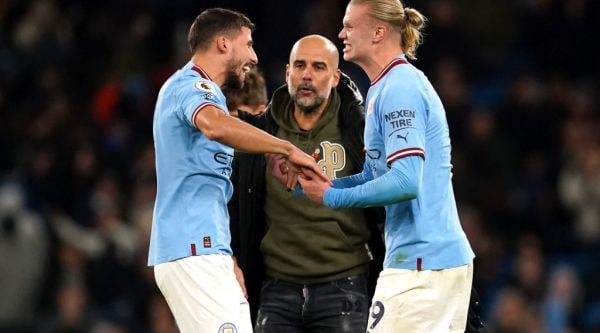 Pep Guardiola claimed Manchester City’s dramatic late 2-1 victory against Fulham was “the moment” of his time at the club to date.

Erling Haaland drilled home a penalty deep into injury time as 10-man City saw off the battling Cottagers in a hard-fought Premier League clash at the Etihad Stadium.

The goal sparked jubilant celebrations around the ground, underlining the relief felt after the champions had played for more than an hour with a numerical disadvantage after Joao Cancelo was sent off.

The win took City back to the top of the table and, despite Guardiola having accumulated numerous trophies in his six full seasons at the club, he felt the character shown on this occasion surpassed everything.

Guardiola said: “Everyone was exceptional for 65 minutes against Fulham, playing the way we played.

“It was the moment of my period here in Manchester so far and, of course, the goal at the end, celebrating with our people – we didn’t win the Premier League here today, of course, but this moment makes sense of our job for all us.

“It was so exciting. After seven years, you always have doubts – do people follow you, are they tired, are people annoyed in their jobs, many thousands of millions of meetings, training session and travel, but today you say, wow, you see they are there.

“They still want to do it, they are still alive and they make us so, so proud. We won because my players are beyond exceptional in all departments.”

City had looked comfortable early on and went ahead through Julian Alvarez but the game changed after Cancelo bundled over Harry Wilson to concede a penalty and see red.

Andreas Pereira struck the resulting penalty and it required fit-again Haaland to come off the bench to snatch the win after the visitors proved a handful.

Guardiola had no complaints about the sending off.

He said: “He was the last man. It was soft contact but there cannot be contact. It is a red card.”

Kevin De Bruyne won the penalty for the late winner.

Guardiola said: “I have said he is not at his best in the recent past – but he was completely the opposite today. He put the team on his shoulders.”

He said: “It is tough to take. The mood is not the best in the dressing room. We came here to embrace the great challenge that we had ahead of us and we did it most of the time.

“They started better than us and the first goal we conceded was clear but I think we started in that moment.

“After we equalised and with the red card the game was more balanced. We showed some moments of quality but I would like us to show more.”

Guardiola also delivered a positive update on injured England pair Kalvin Phillips and Kyle Walker ahead of the World Cup.

Phillips, who has only played 14 minutes of football this season, underwent shoulder surgery in September and Walker had a groin operation last month.

Guardiola said: “They feel much, much better. Yesterday Kalvin had his second full training session with us, full contact. The next game against Chelsea he will be on the bench. Whether he plays or not I don’t know.