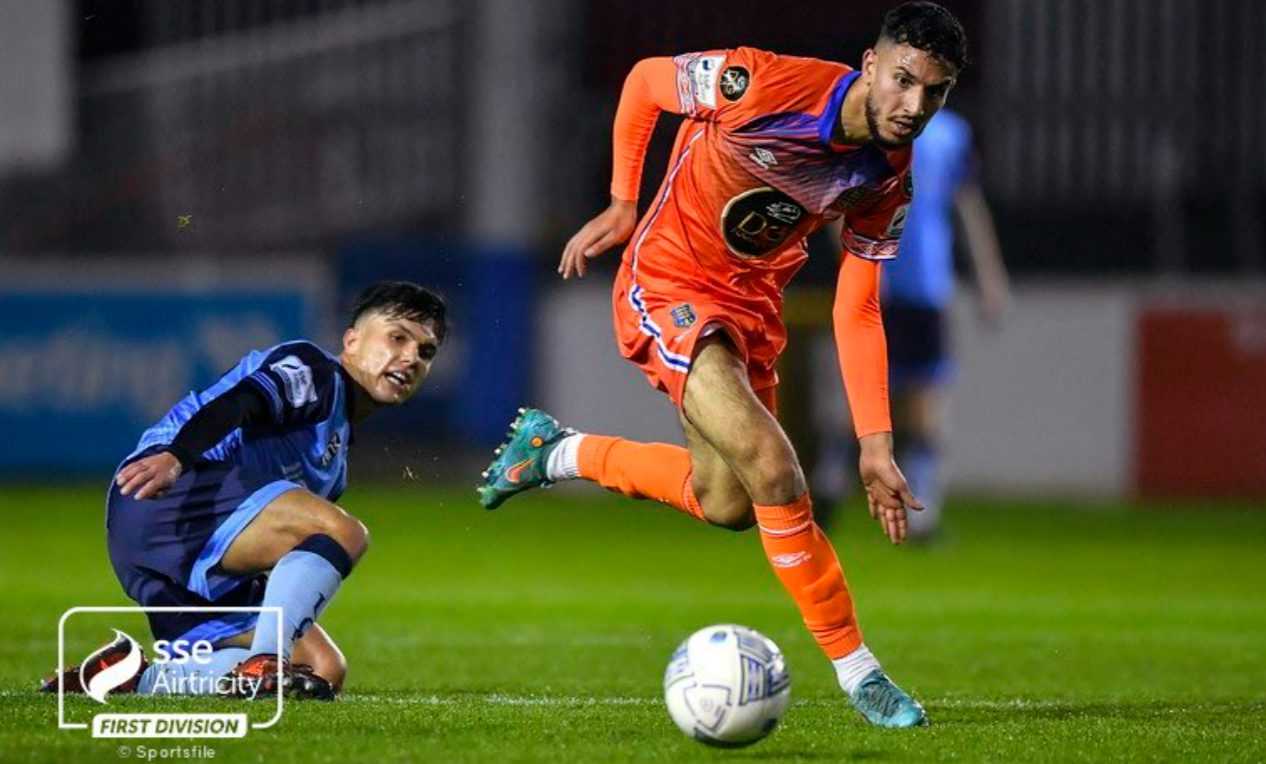 Despite being on a great run, Waterford FC’s bid for an immediate return to the Premier Division came up just short at Richmond Park tonight to UCD. Photo: Sportsfile.

The UCD hoodoo struck for the second year running against Waterford FC as Thomas Lonergan’s golden 15th minute header condemned the Blues to the SSE Airtricity First Division for another season in a relegation/promotion final playoff that ended in chaos at Richmond Park.

After the Students defended resolutely for the duration of the 90 minutes, there was a chance for ten-man Waterford to force extra-time following a controversial 93rd minute penalty that saw Junior Quitirna blaze over the bar after Jack Keaney was judged to have handled a shot from substitute Raul Uche.

That spot-kick came after Danny Searle’s side were reduced to ten men as the game entered added time when captain Kilian Cantwell was shown a second yellow card by referee Rob Harvey, but the question to why Wassim Aouachria wasn’t trusted with the 12-yarder after scoring against Treaty will remain a mystery.

The responsibility to hand the ball to Junior Quitirna, who was earlier in the week named in the PFAI First Division Team of the Year, was a big call from the Waterford management especially after his miss in the first-leg against Treaty, as the strong huge Blues crowd were left cursing the playoff luck once again.

UCD struck for the only goal on 15 minutes when Alex Baptiste gave away a dangerous free-kick out on the right after he fouled Alex Nolan, and the latter whipped in the resulting free that saw Paul Martin fail to get to the ball before Thomas Lonergan, and he applied a close-range header to shock the Blues faithful.

With Sam Todd a colossal in the UCD defence where he threw his body on the line for every Waterford shot from distance, it was hard to see where a Blues goal was going to come out of with Patterson’s goalbound effort on 80 minutes once again blocked by the central defender.

A crowd of 2,781 with over 2,200 from Waterford urged the Blues on in those dying minutes as they tried to find their 81st league goal of the campaign, and there were gasps on 86 minutes when captain Kilian Cantwell cracked in a volley from the edge of the area, but the ball fizzed just inches wide.  And then came all that injury-time drama as the Blues have to focus on First Division football again in 2023.