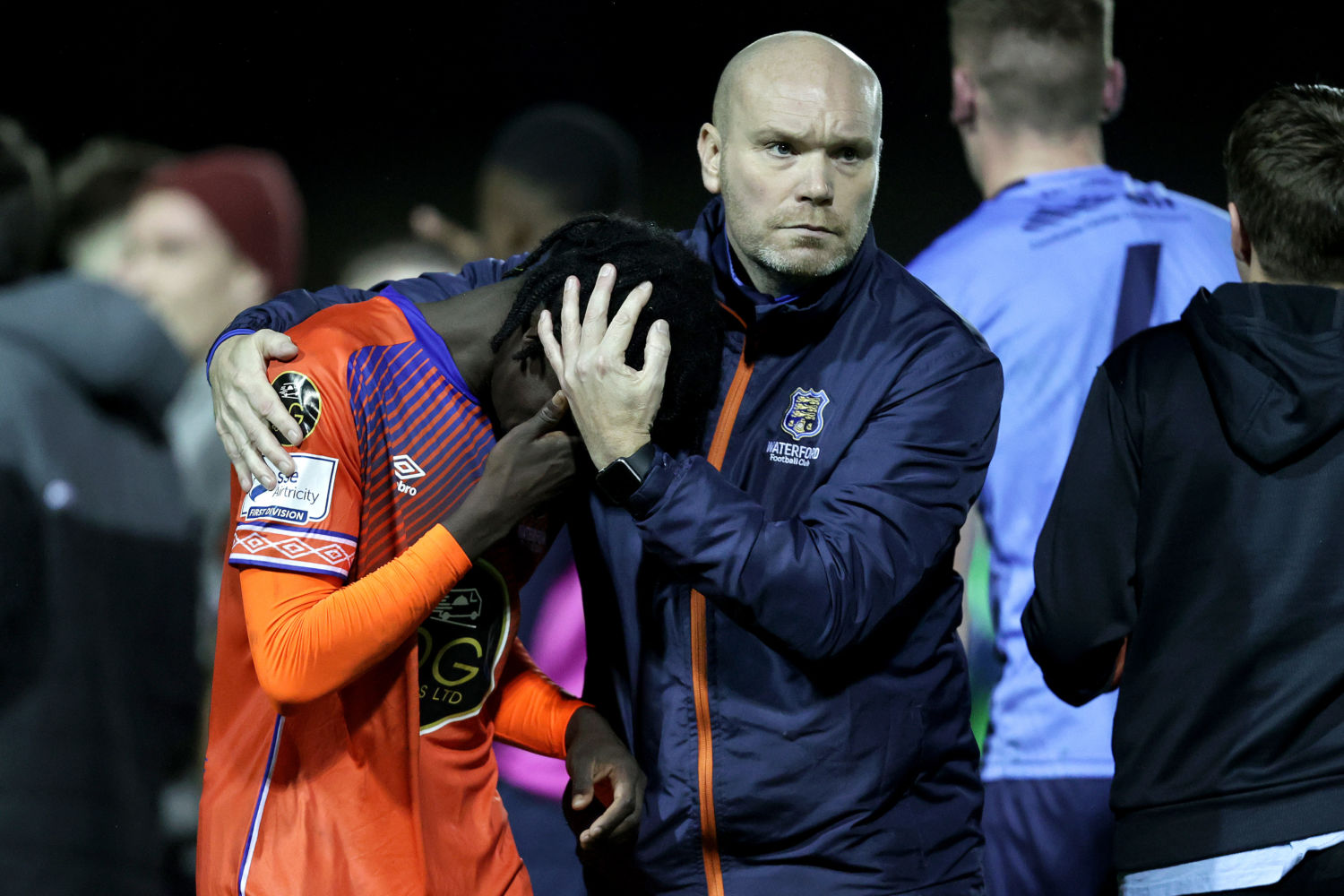 Junior Quitirna is consoled by Waterford FC Head Coach Danny Searle after Friday night’s defeat to UCD in Richmond Park. Searle is keen to stay on with the Blues if he’s wanted. Photo: Inpho.

Waterford FC Head Coach Danny Searle wants to be part of the club for the 2023 season despite suffering promotion/relegation playoff final defeat at the hands of UCD at Richmond Park on Friday night where he also answered the big question regarding the penalty taker in that decisive moment in the dying seconds.
Searle is expected to put pen to paper on a new deal that will keep him at the club for the First Division campaign next season, but didn’t confirm it in his post-match interview on Friday instead claiming that he failed to get the club promoted in the “biggest game of the season.”
After arriving into Waterford in the midst of a difficult period for the club, Searle heaped praise on his players, the coaching staff and the supporters, who were right to be “sceptical” of an Englishman joining the club, but that he is hoping to get the chance to lead the club back to the top division next season.

POSITIVE VIBES
Asked about next season, Searle said: “There’s a lot going on with the club, and I think that the new owners are really positive about what happens going forward, and that was regardless of the result tonight, which will be music to your ears.
“I want to be a part of that, and I hope that they want me to be a part of that. I certainly want the players that I’ve got here now to be part of that. I know that’s a very diplomatic atmosphere, but I have to stick with that for now.
“I have been in talks, and listen there is always talks happening. The bottom line is that we need to know what’s going on. I need to know what they want because it’s a relationship, and in a relationship there’s two parties.
“I need to hear the right things coming out of their mouths, and they need to hear the right things coming out of me. As far as I’m concerned, it’s so far so good. Hopefully we can put something in place.
“Look the bottom line is that I’ve just lost the game that has failed to get us promoted to the Premier League so I’ll see what they’ve got to say and go from there.”

NO BLAME GAME
When asked about the penalty taker considering that Junior Quitirna had missed against Treaty and Wassim Aouachria scored against Treaty and should Wassim been on the penalty, Searle replied: “That’s a question that I’d like answered myself, and that’s what I’ll say on that one. I haven’t gotten the chance to speak to the two players because Junior (Quitirna) is in no fit state to have a conversation with. He needs some time.
“He is a young lad, and he is very emotional. He did step up to take it. In my opinion, if I had the conversation, Wassim was cramping, and probably thought that he mightn’t have the legs to take it, which in that case, Junior would probably have been the next to take it.
“Look he was brave enough to step up to take it, and I’m sure he is feeling every emotion in the world about the final outcome.”
Asked about what he could say to the fans after the game, Searle concluded: “I don’t know what I really can say to them. I looked in their eyes at the end, and the one thing that I can guarantee is that they aren’t hurting as much as I am right now.
“I’m quite an emotional person, and to stand here talking to you about a defeat here tonight is difficult because I wanted to win. The fans were immense. I’ve used enough superlatives to describe them, and I’ve run out of them. They deserve to be in the Premier League.”

PREMIER LEAGUE THE AIM
“I think that this club deserves to be in the Premier League. I think that we’ve got a hell of a lot of work to do in the next seven or eight weeks to make sure that we put ourselves in the best position possible to achieve that.
“I have to thank everyone for welcoming me into this football club, which includes the staff, the players, and supporters. Let’s address the elephant in the room because it was another Englishman coming in.
“The bottom line was that the previous experiences weren’t necessarily what people would have wanted them to be. The staff and players have been both amazing and fantastic. The supporters have warmed because they were sceptical at the start, and rightly so.
“I’ve learned a lot about myself as a person, I’ve learned a lot about Irish football, and I’ve learned a lot about the club. It’s a place where I’d like to be working next season to put right what we should have put right tonight.”