Newstalk podcast: An End of Term 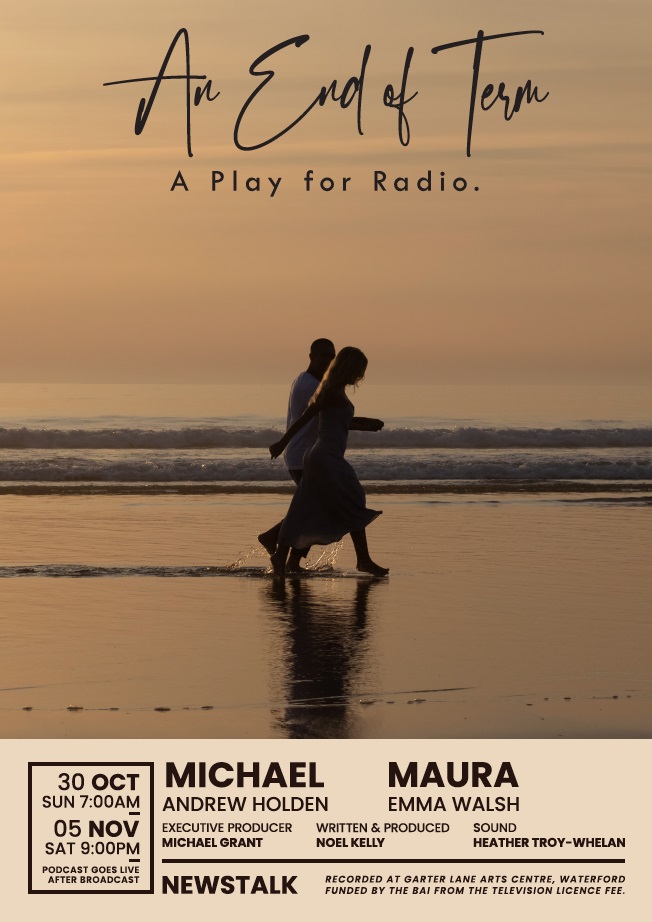 NOEL Kelly’s reputation as a playwright is moving beyond the confines of the city. A recent production of his highly acclaimed ‘Jetty Stars’ drew impressive reviews at this year’s Edinburgh Fringe Festival.

Hot on the heels of that successful production in Scotland, Newstalk has broadcast the first play of his Waterford Trilogy, ‘An End of Term’, that features local actors Andrew Holden and Emma Walsh.

The play itself played was first staged at the much missed Central Hall back in 2013 where the intense and wordy script was a big hit with the audience at its premiere on opening night. Tapping into a rich vein of end-of-middle-age-angst, this script involves the audience from the opening telephone-call monologue of Michael (Andrew Holden) – the exasperated husband of Maura (Emma Walsh) – as their ‘empty nest’ forces them to confront issues that have lain dormant in their relationship for many years.

No longer united by the business of marriage and family and kids, the space that Michael and Maura inhabit is an intense one of missed opportunity, fruitless effort and regret…a lifetime of regret.

Michael’s affair with another teacher, Maura’s unwise investment in developing her hair salon business six months before the crash and the departure of the kids to live their own lives, are all causes for regret.

The script gives full expression to that regret. The clap-happy ‘let’s-put-all-this-behind-us’ as we explore candidly the truth of our experience with a diploma-qualified counsellor at 50 notes an hour sadly divides the couple rather than solving their problems.

Scores are settled and immediately regretted with hesitant half-spoken “I’m sorry…I’m sorry” apologies as new wounds are opened to fester in the relationship. It’s guerrilla warfare on a verbal scale; grenades are lobbed into their conversations as score after score gets settled in a marriage where a couple feel like isolated souls trying to communicate across a sea of regret and memory.

And the memories do remain. Maura still hangs onto her romantic vision of Michael as a handsome young man; he too remembers a young, vital and beautiful Maura. It’s just that they don’t remember it to each other. And that time is over. Finished.

The sense of never living so intensely again hangs in the air as Michael searches for existential meaning from life – a man who could aspire to saving the planet but would fail to put out the bin.

Andrew Holden is excellent as the intense, manipulative, sarcastic and bitter husband who resents where life has brought him and whose condescension towards his wife rankles throughout. A tiresome overuse of quotations from everywhere – Einstein, Shakespeare, the Bible, school poetry books – do little to endear us towards him.

Emma Walsh is powerful and emotive as the long-suffering Maura who garners all our sympathy – the frustrated ‘what-does-he-want’ wife who struggles with her own self-worth when she finds a satellite woman in her own marriage.

‘An End of Term’ was written and produced by Noel Kelly with sound by Heather Troy-Phelan and Michael Gant as executive producer.

The project was supported by the Broadcasting Authority of Ireland as part of the Sound and Vision scheme.

The drama was broadcast by Newstalk and is currently available as a podcast.