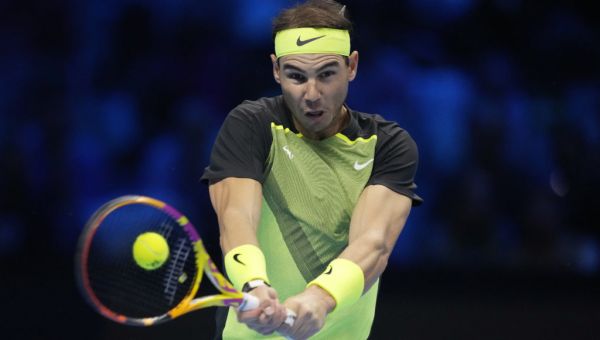 Rafael Nadal finished his ATP Finals campaign on a positive note as he snapped a four-match losing streak with victory over Casper Ruud.

There was nothing to play for in terms of the tournament, with Nadal already eliminated after defeats by Taylor Fritz and Felix Auger-Aliassime, and Ruud guaranteed to win the group to progress to the semi-finals.

But, aside from extra ranking points and prize money, Nadal’s 7-5 7-5 victory also gives him something to hang onto as he turns his thoughts to preparing for next season.

Waving goodbye to a historic 2022 season with a victory 👏@RafaelNadal #NittoATPFinals pic.twitter.com/c0ov8rVamy

The 36-year-old told Amazon Prime Video: “I have been practising well just probably not enough matches to be at the level I needed to be, not enough confidence after six tough months.

“But that’s how it is. Accept that things didn’t go the way that I wanted. At least I finished with a positive victory. It’s important. I’m happy for that.”

Wins have been hard to come by for Nadal since the French Open but 2022 has still been one of the most remarkable seasons of the Spaniard’s career.

Having arrived in Australia in January wondering whether a chronic foot condition might spell the end, he went on to win the Australian Open and French Open in the same year for the first time and his tally of 22 grand slam titles is more than any man in history.

“I can’t ask for more – 2022, even if it has been a tough last six months, two grand slams, finishing the year in my highest point on the ranking, I can’t complain at all,” said Nadal.

“At my age, being able to achieve and be competitive means a lot to me. For 2023, let’s try to have the proper preparation, work the right way and then start the season with the right energy and the right attitude that I need to be competitive from the beginning. I’m excited about it.”

Britain’s Lloyd Glasspool and Finn Harri Heliovaara are through to the doubles semi-finals on their debut in Turin.

Glasspool, 28, and Heliovaara produced an excellent performance to defeat Spain’s Marcel Granollers and Horacio Zeballos of Argentina 6-0 6-4 in their final round-robin match.

It was their second victory of the week after also beating Marcelo Arevalo and Jean-Julien Rojer, with their only defeat coming against Britain’s Joe Salisbury and American Rajeev Ram.

Glasspool said: “It just shows how much hard work we put in and it’s really nice to have it pay off. It’s amazing to be able to play our best stuff on the biggest stage. We’re ready for whoever comes.”

Ram and Salisbury need to win a set against Arevalo and Rojer on Thursday evening to guarantee their progress to the last four having won both their matches so far.