Colligan out to dethrone Munster champions 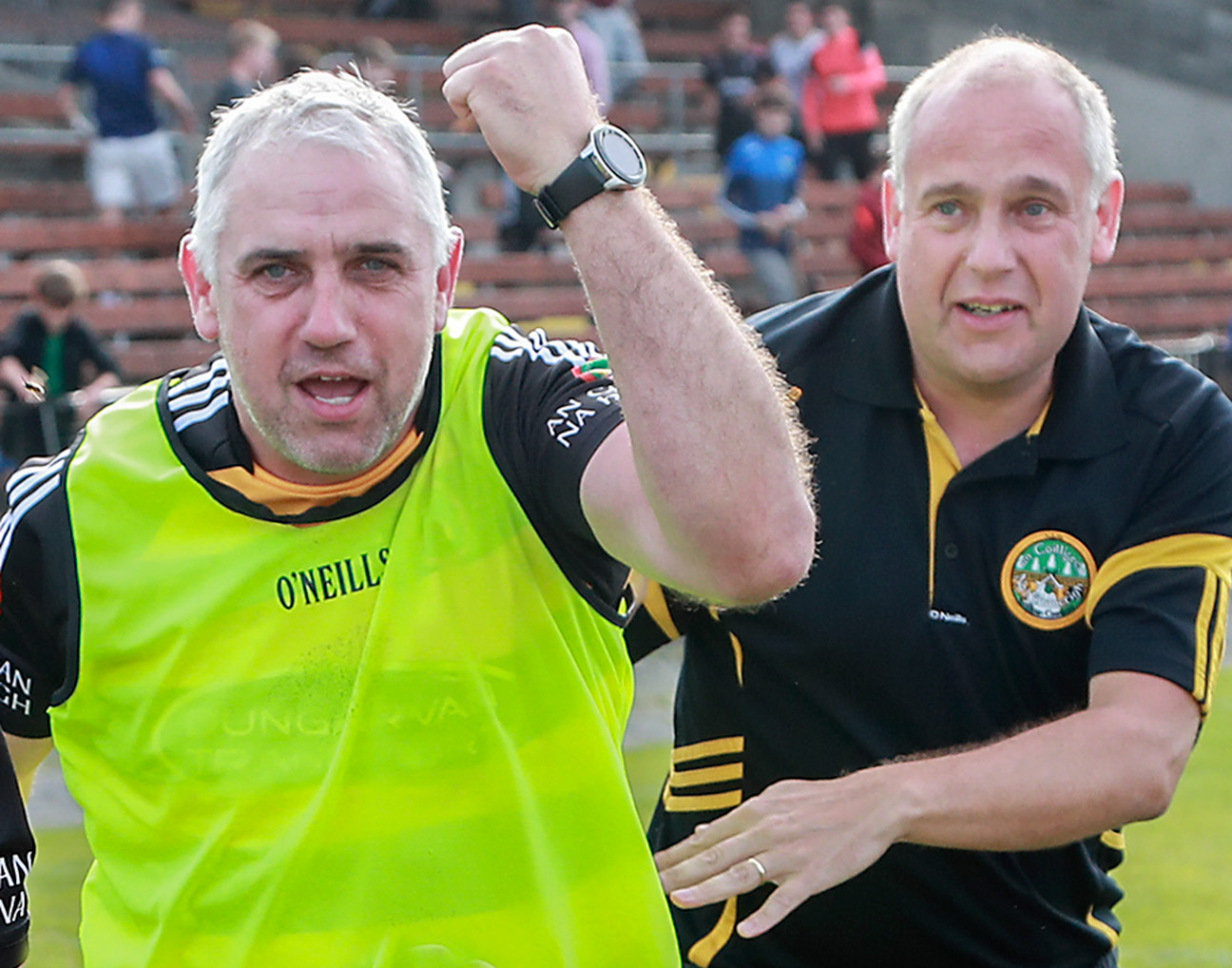 Colligan’s Manager Alan Walsh celebrates with his brother Richie at the final whistle of their county final victory back in September. They head for Cork this Sunday to take on Munster champions, Ballygibblin. Photo Sean Byrne.

Two months on from capturing their county Junior Hurling title Colligan Rockies will take the field in Pairc Ui Rinn on Sunday next seeking to maintain Waterford’s good record in this championship over recent years by reaching the final at the expense of Cork champions Ballygiblin.
Since Ballysaggart became the first Waterford side to win the Munster Junior Club title in 2013 the Waterford champions have figured in every final bar last year’s with Modeligo and Ardmore emerging victorious in the 2014 and 2017 finals respectively while Fenor, Ballyduff Lower, Ballinameela and St. Marys, Tourneena came up just short at the final hurdle.
Colligan will go into Sunday’s semi-final as rank outsiders, which is hardly surprising as they will face the defending Munster champions who lost out by a single point to Mooncoin earlier this year in a dramatic All-Ireland decider. For county and provincial champions in Junior to be eligible to play in the same grade one year on is peculiar to Cork as there is no record of it happening in any other county. One would at least have expected Ballygiblin, as Munster champions, to have at least progressed to the second-tier Intermediate grade in Cork but in a county where a player can line out for his club in a senior county hurling final and against the same club and fellow players a week later in a county football final you can assume that anything is possible.
Since Dungourney beat Fenor in the 2015 Munster Final Cork clubs have dominated in all but one championship in this grade, that being in 2017 when Ardmore beat Ballybacon-Grange in the final before going on to take the All-Ireland title. There have been some close games between Waterford and Cork sides in those other finals and Colligan will not be travelling to Pairc Uí Rinn on Sunday just to fulfil the fixture.
Despite conceding late scores in the county final that allowed Ballygunner to cut a nine-point deficit to five points at the final whistle Colligan were by far the better side and in Colin Dunford they have a player of considerable inter county experience who is capable of making a difference in a tight finish. Likewise, they have players who have featured in underage county teams such as the Booth brothers Dan and Joe as well as Ross Browne and Reece Stringer. The experienced Johnny Wall is most reliable from placed balls while Seanie McGrath in goal, Ian Beresford in defence and Gavin Whelan in attack all showed their worth in the county final.
Ballygiblin will start hot favourites in this game based on their All-Ireland performance last year and it is clear that their experience at that leave has stood to them coming through the Cork championship to this point again. They are virtually unchanged from last year and their top scorers Joseph O’Sullivan and Darragh Flynn will require close attention.
It is all to play for here and Colligan are well capable of springing a surprise.