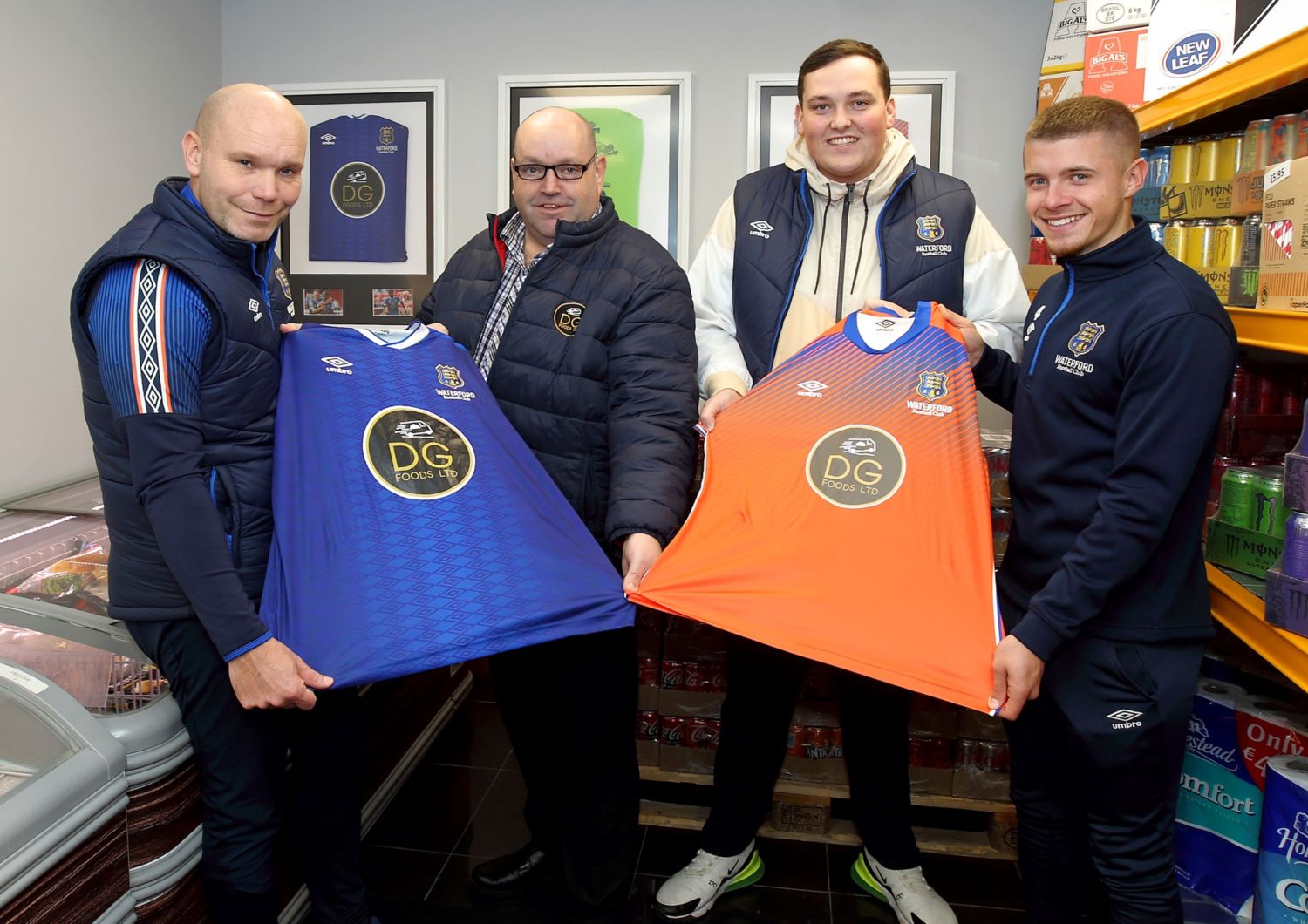 DG Foods have been named as the main sponsor for Waterford FC ahead of the 2023 season. Pictured are Danny Searle, Andrew Hepburn, Gareth Hepburn, and Niall O’Keeffe. Photos: Noel Browne.

As the preparations begin for the SSE Airtricity First Division season in 2023, Waterford FC have confirmed that local company DG Foods will remain on board as the main sponsor for the new campaign after both parties reached an agreement in recent weeks.
The company, which is based at the Six Cross Roads Business Park, came on board as the main shirt sponsor midway through the 2022 season after originally being sleeve sponsor, and their logo will be once again on the front of the new home and away jerseys for next season.
With the club confirming that there will be a delay with the launching of the 2023 home and away kits and merchandise due to a supplier issue, the focus is firmly on ensuring that the local element remains with the club for the season ahead.
Commenting on the decision to remain with DG Foods for the upcoming season, Waterford FC Chairman, Andy Pilley said: “We are absolutely delighted to have Andrew and his DG Foods brand committing to the club for another season.
“The support we’ve received from them since taking over the club has been incredible. DG Foods are a Waterford based company who are genuine fans of the club, something which is hugely important to me going forward.
“We want to encourage local people to get behind their local football club. I’d like to thank DG Foods for their support – hopefully we can have a memorable season with their logo on the front of our shirts next season.”
Andrew Hepburn, Director at DG Foods added: “DG Foods are delighted to announce the new partnership with Waterford FC to become the Official Main Sponsor.
“We are looking forward to the opportunity to continue the alignment of DG Foods with Waterford Football Club for the forthcoming season.
“Waterford is a club deeply intertwined within the city and the team at DG Foods are thrilled to continue working together with the club on a number of initiatives that will enhance the visibility of both of our brands.
“We are extremely proud to be the principal partner of the Blues and to be a part of the club’s progress into 2023 and beyond!” This is brilliant news as they begin to focus on the 2023 season with further announcements expected in the coming weeks.