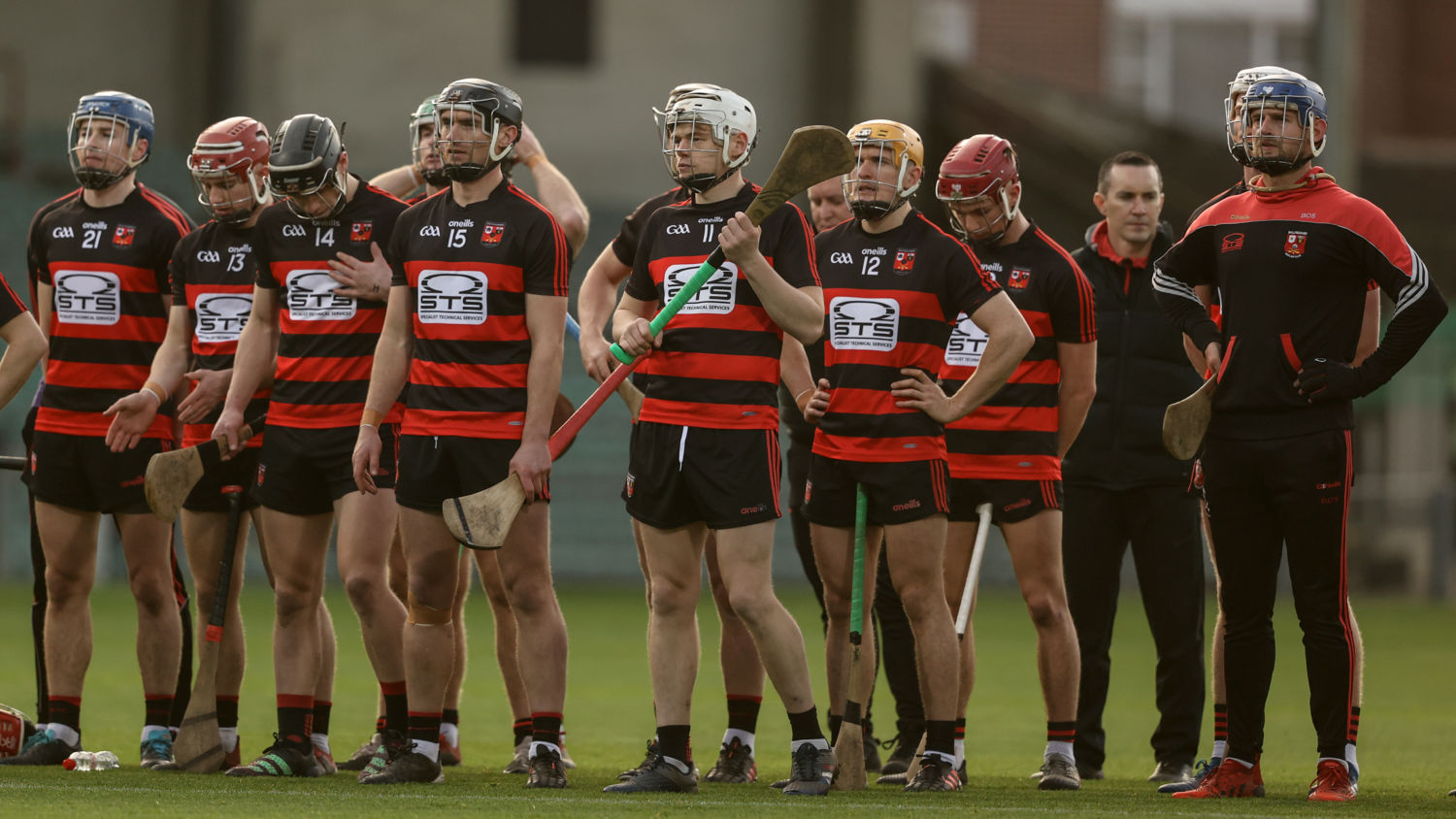 This Ballygunner team don’t do panic. Just cool, calm and collected.
There were no wild celebrations at the full-time whistle on Sunday. Manager Darragh O’Sullivan simply punched the air.
The Lazarus of club hurling rose from the dead again. Nothing will ever top what happened in Croke Park back in February but this eleven-point turnaround will still go down as one of their greatest ever victories.

Comeback Kings
Ballygunner trailed Ballyhale by five points in the second half of the All Ireland final. On Sunday, O’Sullivan’s team found themselves six points down after 27 minutes to a pumped-up Na Piarsaigh with an All-Ireland club title and four Munster championships to their name.
The home side tackled hard and tackled in numbers. Like nothing the Gunners experienced all year. The sliotar didn’t move from midfield for 30 seconds after the throw in. Eight Sky Blue shirts crowded around a ruck at one stage. They celebrated a sideline like a score. Paddy Leavey and Philip Mahony got swarmed in possession. Pauric Mahony and Ronan Power took late hits.
The Na Piarsaigh half backs and midfielders had time to look up and pick out their inside forwards. They worked the ball up the field without a glove being laid on them. Will Henn, Daithi Dempsey and Adrian Breen gave the Ballygunner full back line a torrid time.
By contrast, it took fourteen minutes for Dessie Hutchinson to get the ball in his hand. At one stage, Philip Mahony hit an aimless high ball in his direction.
The Gunners upped their work rate in the second half. None more so than Peter Hogan. As a team, they made 20 tackles. During a mad passage of play in the 37th minute, where the sliotar was like a hot potato, Ballygunner put in seven tackles.
All of this hustle and bustle meant that the Na Piarsaigh inside trio didn’t get the same supply of ball. The Ballygunner forwards pressurised the Na Piarsaigh backs, making body contact or hurley contact, and Philip Mahony manned the D.
The Gunners also stuck to their short game in the face of adversity. They don’t know any other way. Philip and Pauric Mahony both got their heads up to pick out an unmarked Conor Sheahan and he did the rest. A short puckout from Stephen O’Keeffe went straight to Peter Casey in the first half but he continued to pop the ball out to his full back line.
The players stayed calm and so too did the management. The first substitution was made in the 57th minute. They trusted the fifteen players on the field.
Once again, the Gunners found a way to get the job done again. They have now won 22 games in a row in all competitions since losing the 2019 Munster final to Borris-Ileigh. 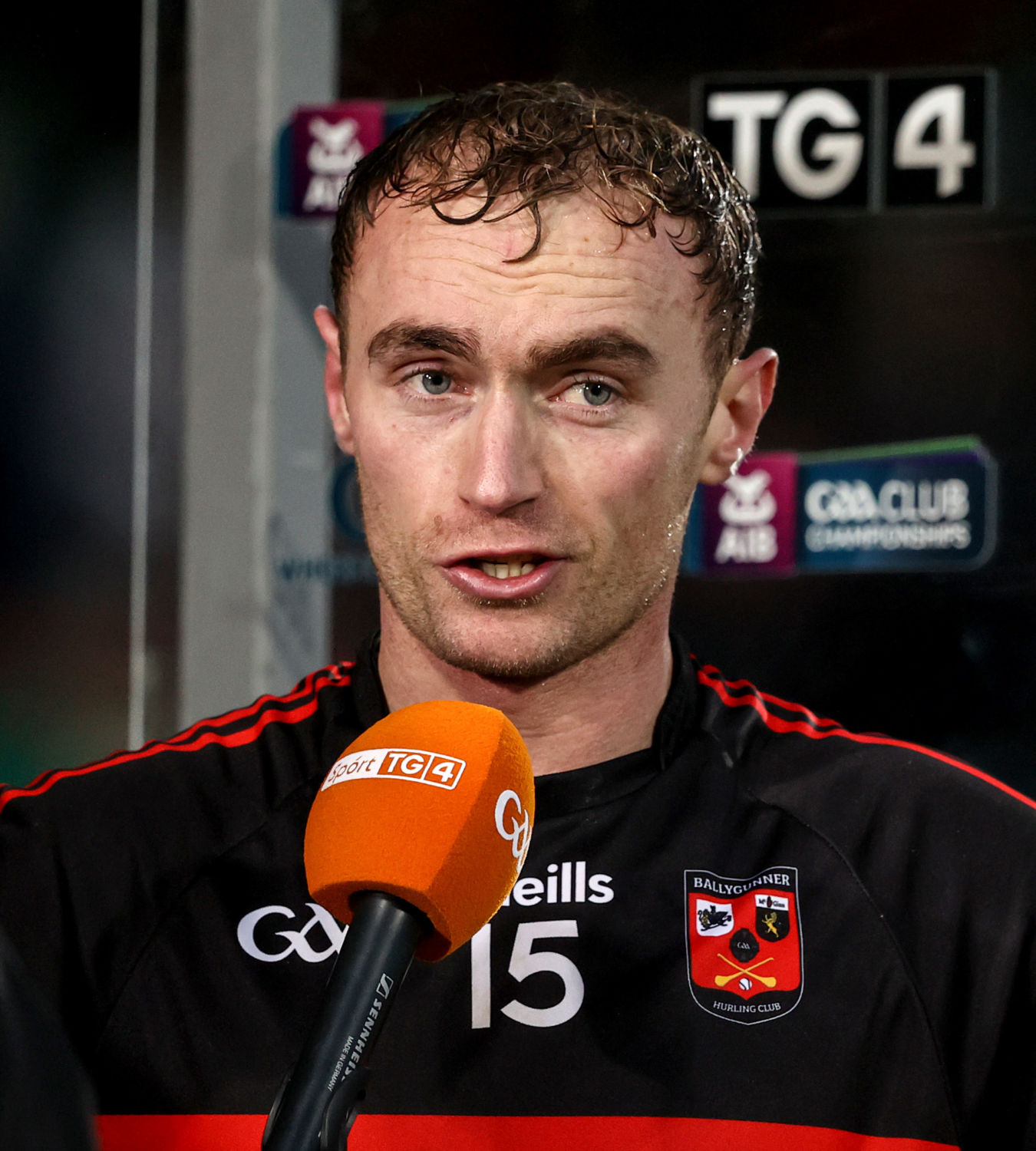 Pauric Mahony after picking up his Man of the Match award from TG4.

Pauric Mahony scored thirteen points from eighteen shots at the posts (seven from play) in one of his best displays for Ballygunner. The way he bounced back from his first half misses made it all the more impressive.
The former Waterford captain had four wides during that opening period including three frees from his own half. It didn’t affect his shooting in open play. After he missed one of those long range frees, he responded with two massive points in the space of a minute.
He nailed eight of his nine attempts in the second half and assisted one for Conor Sheahan with a pinpoint crossfield pass. Ballygunner’s first five points came from the stick of the number fifteen as they went from five down to one up. He popped up in the right place at the right time. Kilkenny great Eddie Brennan summed it up best. “Is there any hurler more effective than Pauric Mahony to float around and pick up ball without covering a world of ground, just mooches around effortlessly.” 2-59 in seven championship games this season. A scoring machine.
Mahony has shown resilience throughout his career. He has bounced back from a broken leg in 2015 and a cruciate knee ligament injury in 2020. Whenever this Ballygunner adventure finishes, he should have a part to play under Davy Fitzgerald. 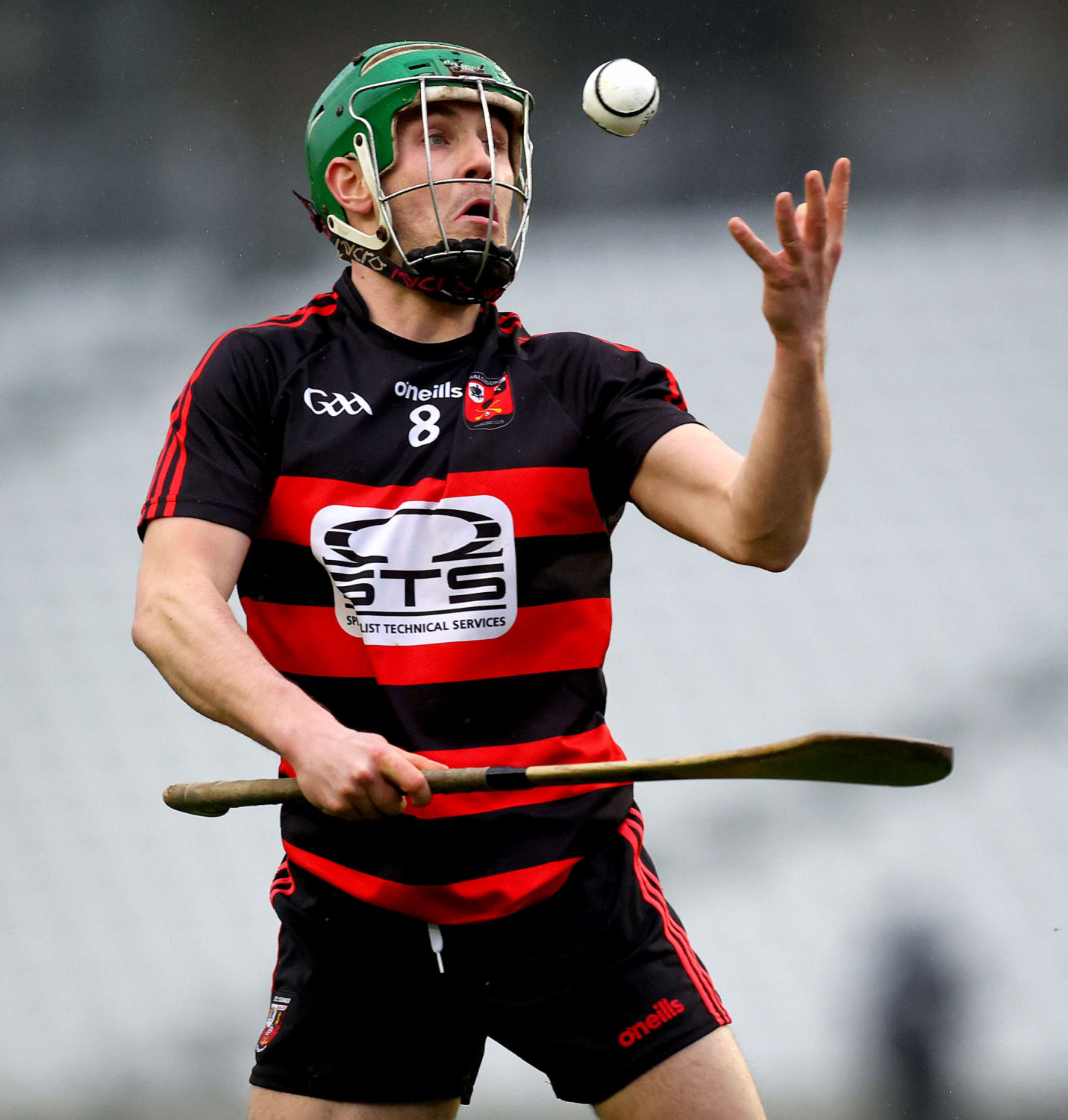 Only Mahony outshone Conor Sheahan (pictured above). Will O’Donoghue clattered into him in the first-half but the diminutive number eight got up off the deck and enjoyed his finest hour in a red and black shirt.
Sheahan is the usually the supplier but on this occasion, he was the shooter. Four points from four attempts at the uprights. He only scored five points in this year’s championship before the ball was thrown in.
He struck two in the first half including one from his own 65 and set up the opening score for Patrick Fitzgerald. Twice in the second half, he found himself in splendid isolation and he split the posts on both occasions. He also laid off a point for Ronan Power.

All the small things
Two of the smallest players on the pitch turned the tables in the second-half. The yellow helmet of Peter Hogan or the white helmet of Mikey Mahony emerged from ruck after ruck with ball in hand. Two men happy to do the unglamourous stuff.
Hogan brings energy whenever he plays. That’s exactly what Ballygunner needed in the second half. His work rate between the two 65s helped his side wrestle control of the middle third. The number twelve was involved in the play eighteen times during that second period. This included an assist for Pauric Mahony.
Mikey Mahony made fourteen plays. Like Hogan, he did his best work far out from goal. He made a great catch to engineer a point for big brother Pauric. The number eleven gave a fist pump when he won a free two minutes into injury time. He knew they were heading back to the Munster final.

Patrick Fitz the bill
The TG4 cameras picked out a hooded Davy Fitzgerald in the stand on Sunday. His namesake will surely see game time during his second spell as Waterford manager.
On a day when Dessie Hutchinson was quiet by his high standards, Patrick Fitzgerald stepped up. The eighteen-year-old hit the opening score to settle his team, set up Hutchinson’s goal and finished one of his own to start the second half comeback. It was only his third senior start.
You can see why he is regarded as the brightest underage talent to emerge from Ballygunner since Paul Flynn. 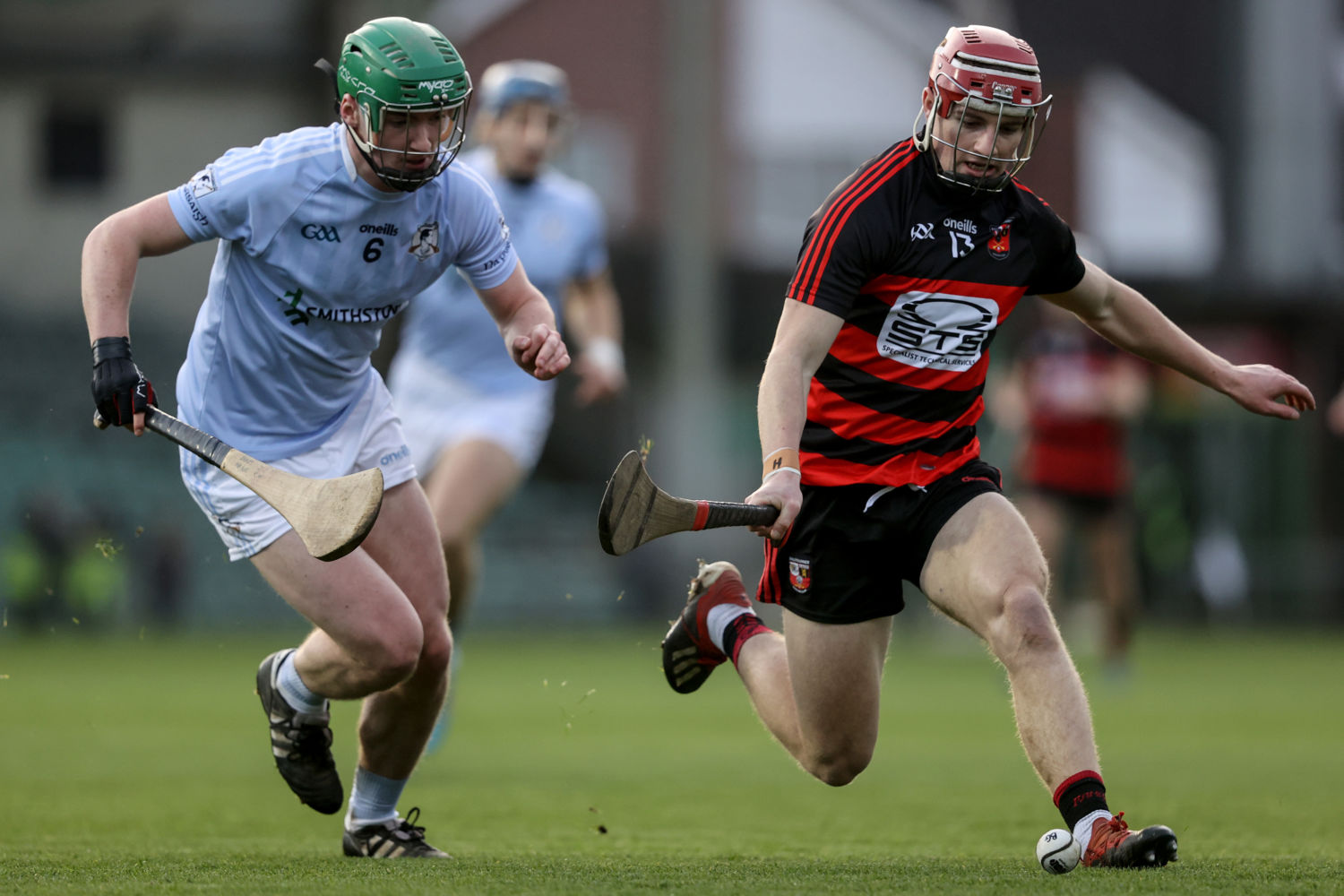 Patrick Fitzgerald of Ballygunner getting away from Na Piarsaigh’s Emmet McEvoy.