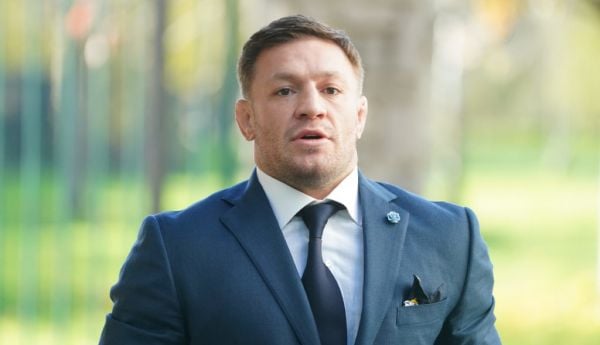 Lawyers for Conor McGregor have asked gardaí to consider “a proposal” in the UFC star’s dangerous driving prosecution in Dublin, a court has heard.

He was arrested and initially charged with two counts of dangerous driving in the 2019-registered car at the N4/M50 interchange in Palmerstown and Lucan Road, being uninsured, having no licence, and failing to produce his documents within ten days.

The Director of Public Prosecutions (DPP) directed summary disposal of the case at district court level.

There had been brief hearings in April and June, and in September when he was further charged with careless driving, a lesser offence, in connection with the incident.

The fighter returned to Blanchardstown District Court on Thursday morning when he was expected to enter a plea.

Clean-shaven and wearing a blue suit, Mr McGregor, who arrived in a black Range Rover, greeted reporters with “hello, good morning” as he strode into the courthouse.

He fist-pumped an excited fan as he sat in the public gallery until his case was called when he moved over to the defendant’s bench.

His barrister, David Staunton, said that the court had, on the last date, kindly facilitated an adjournment for the new charge to be explained to Mr McGregor.

Mr Staunton said: “We have instructions to make a proposal”, adding that the defence had spoken to the prosecuting officer, Garda Denis Lordon, who would require directions from the DPP.

A plea still needs to be entered.

Judge David McHugh remarked that the matter has been on the court’s list “for some time”. He reminded the barrister that the court was told there would be progress on the last occasion.

He stressed that the defence could not continue “to be put into the list and then put back” and asked if a hearing date was required.

In reply, Mr Staunton conceded that was a fair observation, but he was reluctant to seek a hearing date and did not think it would be required. He added that the garda needed to obtain the directions.

After asking the defence how long was needed, Judge McHugh adjourned the case and ordered Mr McGregor to appear again on January 11th.

Furthermore, he warned that he expected the case to proceed on the next date when it will be listed at 11.30am and given a 15-20 minute slot.

Mr McGregor did not address the court and left following a consultation with his legal team.

However, he stopped to give a young fan an autograph and told reporters, “all good, great to be back”, before getting into his Range Rover and being driven away.