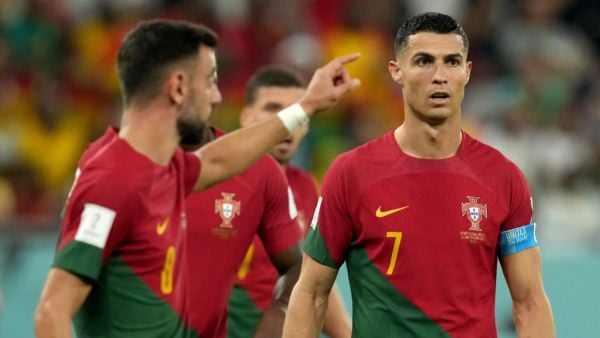 Cristiano Ronaldo insisted his chapter at Manchester United was “closed” after he made World Cup history just two days after severing ties at Old Trafford to help Portugal beat Ghana 3-2 in their opening Group H match.

Ronaldo, who is a free agent after his acrimonious break-up with United, became the first player to score in five World Cup final tournaments when he tucked away Portugal’s first from the penalty spot.

Andre Ayew’s equaliser briefly looked like it would spoil Portugal’s party, but a quickfire double from Joao Felix and substitute Rafael Leao restored the advantage before Osman Bukari hit a late second for Ghana.

A historic moment for a legendary player 👏#FIFAWorldCup | @Cristiano pic.twitter.com/YbpOoQHgPP

Speaking in Portuguese, which was translated by FIFA, Ronaldo said: “This was a beautiful moment in my fifth World Cup.

“We started with our good foot. It is very important to win. We know that in these competitions our first match is crucial.

“But also, on the record of being the only first player in five World Cups to score, that is something which makes me very proud.

🖐️ Cristiano Ronaldo, the first man to score at five FIFA World Cups, and your #Budweiser Player of the Match.

Ronaldo will score __ goals in this tournament? 👇

Ronaldo, who was named the official player of the match, took just one question from reporters, only touching briefly on his fall-out with United.

“It was an important step and we won,” he said. “It was a week that finished this chapter, it is closed.

“We wanted to start of with the good foot. We won, I could help my team – and all the rest does not matter.”

“Cristiano is a phenomenal legend, like many others have come and gone. In 50 years’ time we will continue to talk about him.

“We talk about Pele and Maradona who played 50 years ago and so I think we will continue to speak about Ronaldo like the other players I speak about.”

With Uruguay and South Korea having earlier played out a goalless draw, Portugal have taken control of Group H.

Santos said. “It was a difficult game from the first half, we had control, but we should have been more assertive. After the first 15 minutes, we could not compose our rhythm. We could create three or four situations.

“That said I think we should have had more control, more fluidity because I think our players are able to be better. We should also give merit to the opposition because they played a very good match.”

Ghana coach Otto Addo felt his side had been somewhat hard done by.

“We really did well and up to the penalty, everything was possible,” he said. “We allowed less chances – there were two or three half-chances from Portugal. Then (after the penalty), the game got a little bit wild.

“Inaki (Williams) at the end could have scored the third goal, but Portugal are one of the world’s best-ranked football teams and I think we really did well.”

Addo was, though, less than impressed by the decision of the referee not to check the penalty incident on VAR review.

“We were playing the ball and then there was a contact between the players,” he said. “I don’t know what they (officials) were doing, whether they were not paying attention or if the VAR was paying attention.

“I looked at that scene at that moment, it was just incredible. If you do a replay and look at it again, we were playing the ball it was actually a foul against us.”