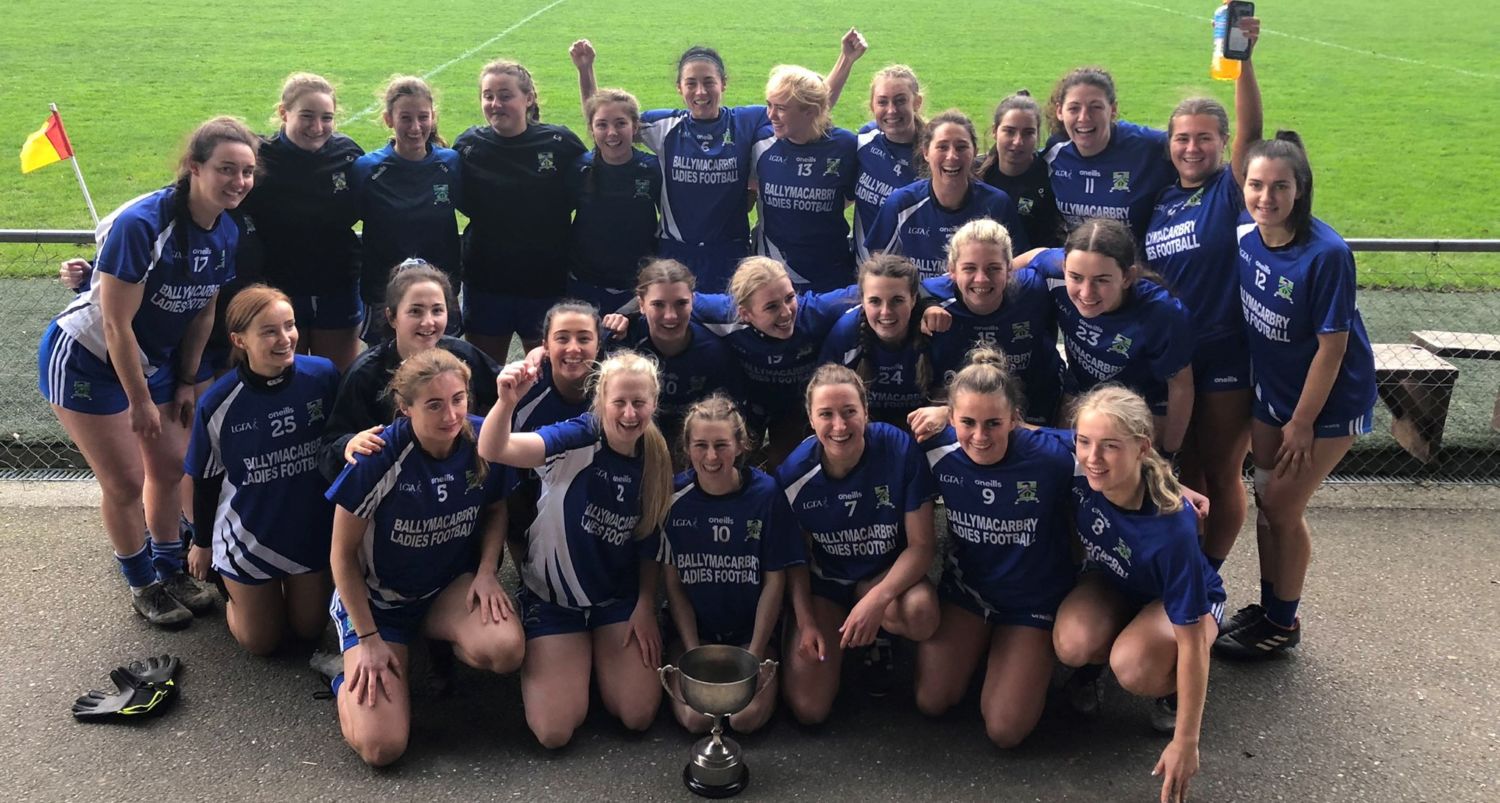 The Ballymac players celebrate after their recent Munster Final win over The Baner of Clare. Now they stand 60 minutes away from Croke Park and an All-Ireland Final appearance.

Back in 1986, Ballymacarbry welcomed Hollymount of Mayo to the Millfield for their first ever All Ireland semi-final. The Dungarvan Pipe Band led the pre-match parade around the pitch. The programme cost just 40p. Ballymac wore the Waterford colours and delivered a famous win.
Saturday marks another big occasion in the club’s history. After taking out 2019 All Ireland champions Mourneabbey in Munster, Ballymac must now beat 2021 winners Kilkerrin-Clonberne to reach Croke Park on December 10.

A GAME NEEDED
Ballymac underperformed in the provincial final but still got their hands on the Michael Ryan trophy for the first time since 2000. It was an emotional day for the club after so many disappointments. The embrace between their two longest serving players Michelle McGrath and Michelle Ryan said it all.
Mike Guiry’s side must bring their A game to Dungarvan on Saturday. The new Munster champions can’t be as wasteful as they were against The Banner. Five chances for green flags went abegging. They also turned over too much ball high up the pitch.
In a low scoring final, Sinéad Kenrick led the way with four points from play. Aileen Wall is a menace close to goal with her blistering pace. The LGFA Player of the Month for October can create and convert big opportunities. Michelle Ryan had her right knee heavily strapped last time out. Ballymac will need their most experienced forward firing on all cylinders. Midfielders Kellyann Hogan and Bríd McMaugh also carry an attacking threat.
The 41 in a row Waterford winners kept three clean sheets during the Munster championship. Another shutout would do nicely on Saturday. Goalkeeper Lauren Fitzpatrick made a vital save in the second half against The Banner and found her targets off short and long kickouts. Michael Ryan rates Karen McGrath as one of the top six defenders in the country. Her blocking, her tackling and her solo runs lift the rest of the Ballymac team. Laura Mulcahy may get the task of tracking one of the opposition’s marquee forwards. She is a consistent performer for club and county.

ALL-IRELAND CHAMPIONS
Kilkerrin-Clonberne won their first All-Ireland in January with a four-point win over Mourneabbey in Birr. The Cork side managed just one point from play. It was revenge for 2019 when a late, late Laura Fitzgerald point gave Mourneabbey the title. The ladies in red completed ten in a row in Galway last month. They swept aside Mayo champions Burrishoole (1-15 to 0-4) to claim their fifth Connacht title in a row. Burrishoole failed to score from play.
Kilkerrin-Clonberne had four starters on the Galway senior team this year and five more players on the panel. Twin sisters Nicola and Louise Ward both won All Stars in 2019. Nicola plays at six while captain Louise lines out at centre forward. Their father Willie is the manager. The Noone sisters (Hannah, Eva and Lynsey) are also key players while Olivia Divilly is a regular in the Galway attack. All six forwards are part of the inter county set-up.
A first provincial title in 22 years was a monkey off the back for Ballymac. They should play with more freedom on this occasion, especially in the familiar confines of Fraher Field. The hosts are coming up against a seasoned Kilkerrin-Clonberne side however. The reigning All Ireland champions hold all the aces in attack.