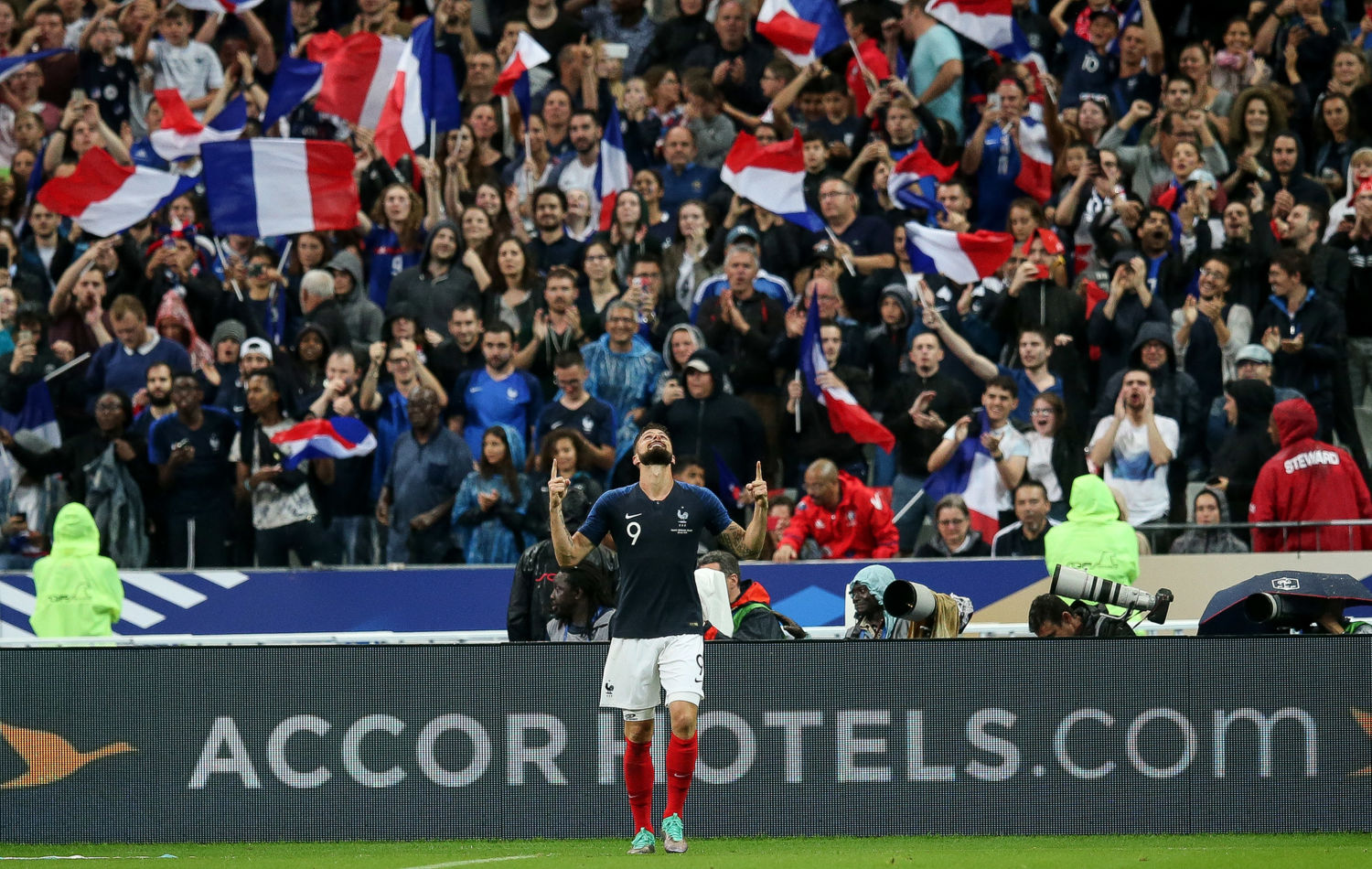 Olivier Giroud, who will spearhead France’s attack as they attempt to defend their World Cup crown in Qatar.

“Name a World Cup and I’ll most likely remember what I was doing and where I was.”

QATAR 2022 has arrived and not everyone is happy. I heard a lady recently berate the fact that this tournament was being foisted on her for a whole bloody month and in the winter! Her main concern, will it interfere with her beloved soaps? Into every life a little rain must fall. I feel her pain but the clan in Carraigstown will be with us always. The World Cup is only every four years. Soapies, please cut us football fans some slack.

As for Qatar, I have to say I’m not in favour of a winter World Cup in the middle of the dessert and it should never have been given the go ahead on the time of year alone, aside from all the other issues. The players and managers would certainly not have chosen to play a World Cup in a country with a questionable human rights history and no footballing history whatsoever. Money talks though and it’s sad that commercial gain wins out yet again. That said, I have a long and sentimental association with the event and I will be glued to it this time round, as with all the others.

I remember Waterford playwright Jim Nolan saying once that he tends to date his life and times around World Cups and I am on exactly the same page here. Name a World Cup and I’ll most likely remember what I was doing and where I was.

1986, Maradona and the ‘Hand of God’, the Danes in full flight, the Mexican wave. At the time I worked for ABC Radio in Waterford and I have great memories of that summer. The Irish covering themselves in glory during Italia 90. Schillaci and that goal that broke our hearts. The whole country was football mad. Watching with mates in pubs where everyone was of one accord. Bursting with pride, just a great time for so many of us who remember that golden era for Big Jack and his charges. I’ll never forget the atmosphere in the Forum in particular. Good times.

I still recall rushing from WLR to get to the venue and not miss any of whatever game was on that day. It was like nothing any of us had experienced before and Ireland really did come to a stand-still on match days. Nothing else mattered. The nice thing here too was that we were all of us in the same boat, on the same side. No Liverpool V Man United or Chelsea V Arsenal rivalries. We were all green, all Irish and everyone shouting for our boys. I wonder if we’ll ever again see moments like those?

For me, though, I still revert to Munich 1974. They say you never forget your first time. That was the first World Cup for me and as a 10-year-old, I threw myself wholeheartedly in to every aspect of the competition. I reckon I saw every game RTE televised.

One of the big things for kids back then was buying the World Cup sticker album that went along with the football. All the teams competing had player profiles therein and your task was to fill your album by buying packets of the soccer stickers and also trading with your mates for ones you didn’t manage to have from purchases.

If you bought a decent amount, which I most certainly would have, inevitably you would wind up with duplicates of various players. The mission then was to swap, say, Chile’s striker for Bulgaria’s goalie or whoever you needed that was missing in your album. Some guys drove a hard bargain and it wasn’t uncommon to have to hand over six or seven players to persuade your ‘mate’ to part with one sticker you desperately wanted. The football, though, was what it was all about. Sitting down in the afternoon, evening, whenever a live match was on, I was hooked. I had a wall chart on my bedroom wall. That was a feat in itself as my Mum and Dad normally didn’t like me putting stuff up over the wallpaper.

Exotic names lodged in my mind and are still there to this day. Sanon of Haiti, Johnny Rep from Holland, Lato of Poland, the eventual top scorer in the competition, the hapless Zaire team who got battered 9-0 by Yugoslavia.

Poor Scotland exited despite having not lost a match. That Netherlands team though was special. Total football was what they were labelled as purveyors of and they did it with style and no small degree of class. A joy to watch. West Germany as they were then, were my team from the outset and I was delighted to see them lift the cup against that brilliant Dutch side masterminded by Johan Cruyff. Muller, Hoeness, Breitner, heroes for the host nation who would despatch Holland 2-1 in the final on a Sunday afternoon in July at the Olympic Stadium in Munich.

The last scenes of World Cup ’74 on my telly saw the German captain Franz Beckenbauer raise the gold trophy before the ecstatic home support as commentator Jimmy Magee signed off and bade farewell until, as he said, we would all meet again at the next World Cup in Argentina in four years’ time. I couldn’t help feel a little deflated that after weeks of wonderful football, it was now all gone. For the whole month it was the only thing I cared about.

Now we’re about to go again and the football caravan sees us in strange surroundings. I hope we get a World Cup to remember for all the right reasons. Qatar in November will be odd and it’s not what we’ve been accustomed to but we must surely take it on its merits and just expect the best.

It’s sad naturally that Ireland isn’t there but at the end of the day it’s about the beautiful game and we would hope that over the next few weeks, we’ll get to see some great matches, exciting football and maybe a new star or two will be born. Kids all over the world like me in 1974 will be watching their first World Cup. I hope they enjoy it as much as I did all those years ago.

Here’s to a great month. Soap lovers, be kind. It’s only every four years.