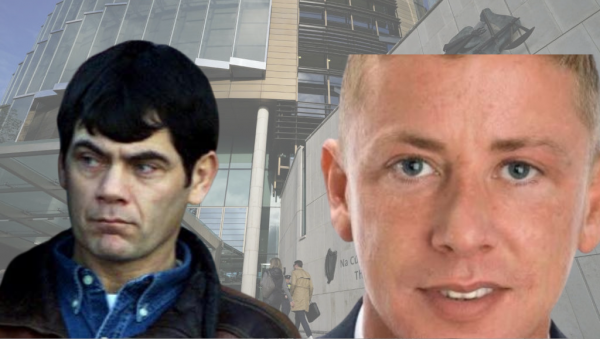 Conversations between Regency Hotel murder accused Gerard ‘The Monk’ Hutch and former Sinn Féin councillor Jonathan Dowdall that were captured by a garda bugging device are admissible in evidence and any issue about where the device travelled to is “a cloud” which the defence has placed over the case, a prosecution barrister has told the Special Criminal Court.

Prosecution counsel agreed with the presiding judge it was the State’s case that, once a surveillance device is placed and retrieved lawfully on a car within this jurisdiction, “then it does not matter a damn where the vehicle was in the meantime”.

Sean Gillane SC, for the Director of Public Prosecutions, submitted on Monday that an audio surveillance device is “simply an inanimate movable item” which had been “applied, sought, deployed, initiated and retrieved within the State” and that the data was recovered within the State. He added: “No question of extraterritoriality in truth arises”.

He added: “Can I ask the court whether it is to be imputed to the Oireachtas that they are blind, deaf and oblivious to the existence of the Border between here and Northern Ireland and in the context of the Criminal Justice Surveillance Act 2009, which has as one of its core functions the investigation of terrorist offences on one of the most porous Borders in western Europe”.

Mr Gillane submitted that the defence’s contention was that as soon as one reaches the Border of the Carrickdale Hotel that “all bets are off and the bug doesn’t work”. The trial has heard that the vehicle crossed the Border at the Carrickdale Hotel in Dundalk Co Louth at 3.12pm on March 7th, crossing back into the Republic at 10.50pm that night at Aughnacloy in Co Monaghan.

Last Friday, defence barrister Brendan Grehan SC, for Mr Hutch, told the non-jury court that “on its face” there had been an illegal operation of the Criminal Justice Surveillance Act 2009 in this case and that the prosecution was seeking to “wheel the evidence in” which “extended beyond the territorial boundaries” and say “none of that matters”.

Mr Grehan also submitted that the permission to deploy a garda bugging device that recorded conversations between his client and Dowdall were sought under “a culture of secrecy” and with “an unintentional lack of candour”. He stated that a surveillance device being deployed on a vehicle gathering intelligence whilst operating outside of the jurisdiction was in “contravention” of the terms of the Act.

Mr Gillane completed his submissions on Monday to the three-judge court on why the secret audio recording, which the State says is “part of the core” of their case, is admissible.

Mr Grehan will respond in full on Tuesday to Mr Gillane’s submissions before the three judges rule on the admissibility of the contents of the recorded conversations having regard to the extraterritoriality issue.

Jonathan Dowdall (44) – a married father of four with an address at Navan Road, Cabra, Dublin 7 – was due to stand trial for Mr Byrne’s murder alongside Gerard Hutch but pleaded guilty in advance of the trial to a lesser charge of facilitating the Hutch gang by making a hotel room available ahead of the murder.

Dowdall has been jailed by the Special Criminal Court for four years for facilitating the Hutch gang in the notorious murder of Kinahan Cartel member David Byrne.

The former Dublin councillor is currently being assessed for the Witness Protection Programme after agreeing to testify against former co-accused Gerard Hutch, who is charged with Mr Byrne’s murder.

Mr Hutch’s two co-accused – Paul Murphy (61), of Cherry Avenue, Swords, Co Dublin and Jason Bonney (50), of Drumnigh Wood, Portmarnock, Dublin 13 have pleaded not guilty to participating in or contributing to the murder of David Byrne by providing access to motor vehicles on February 5th, 2016.