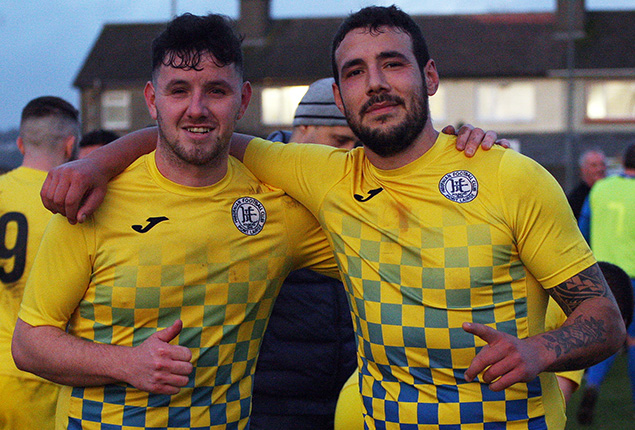 Jason Keane and Jeff DaSilva who found the net for Hibs against Balscadden in the FAI Junior Cup at Ozier Park on Sunday. Photos: Paul Elliott.

There was good news for both Hibernians and Tramore AFC in the FAI Junior Cup 5th round draw that was made on Thursday afternoon last as both teams have received home ties for the games that will be played on the weekend of January 22, 2023.
After their narrow 2-1 win over Balscadden in the last round at Ozier Park thanks to goals from Jeff Da Siliva and a match winner from Jason Keane, the Mitchell Kennedy Park club will take on Mayo side Castlebar Celtic in a game that they’ll be delighted to be playing at home.
They will be up against a Castlebar Celtic outfit that were 2-0 winners over St. Canice FC in the last round with goals from Luke Kelly and Jordan Loftus proving to be the difference in that game, but this clash will be a totally different affair.
With Hibs playing a lot of their tie against ten men after Balscadden had defender Chris Evers sent off inside seven minutes, they’ll be hoping in the last 32 tie that they’ll be able to take their chances, something that they didn’t do in the last round to make life easier for themselves.
For their management team of David Breen and Brian O’Sullivan, they will take nothing for granted against Castlebar Celtic, who will make the trip to Waterford without fear, but having home advantage at this stage of the competition is massive for Hibs, and they’ll fancy their chances of progressing into the next round. 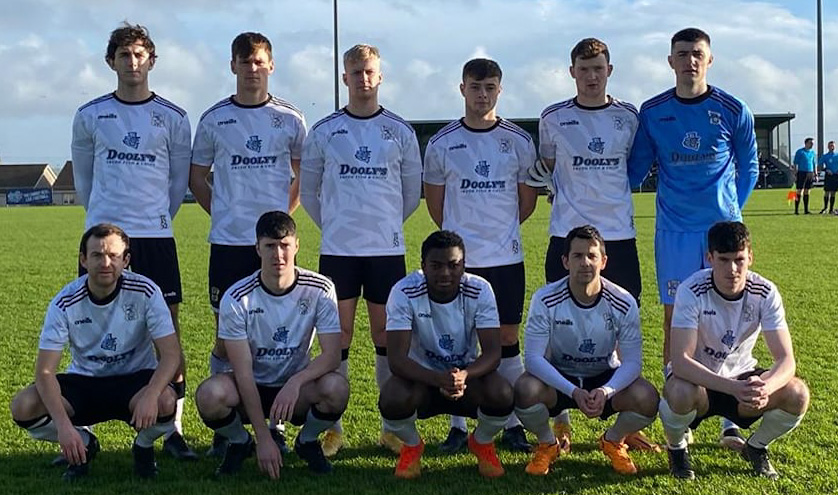 The Tramore side that defeated Fairview Celtic in the FAI Junior Cup.

Sam Sheppard notched the golden injury-time winner that sent Tramore AFC into the last 32 of the FAI Junior Cup, and as a result has set up a home tie for the Graun Park club after they were paired with Wexford side Gorey Rangers.
The seaside outfit were far from convincing in their fourth round win over United Churches League side Fairview Celtic, but they got the job done, and they will now that they’ll have to up their game when they face the visiting challenge from Wexford.
Gorey were winners over Summerville Rovers away from home as they won by three goals to one thanks to goals from Killian Cushe, Stephen Moloney, and Mark Woods, so they’ll certain pose a challenge to the seaside outfit when they meet in the New Year.
Tramore went a goal down in the last round when Cian Davitt put Fairview in front, but they responded well through a Charlie Binions goal before the visitors had a player sent off, and despite withstanding some pressure, Sheppard’s winner gives them a chance to look forward to Gorey’s visit.
The third Waterford team in the hunt for the FAI Junior Cup, Portlaw United, will be away from home in the fifth round should they beat St. Michael’s, with Howth Celtic awaiting in the next round.