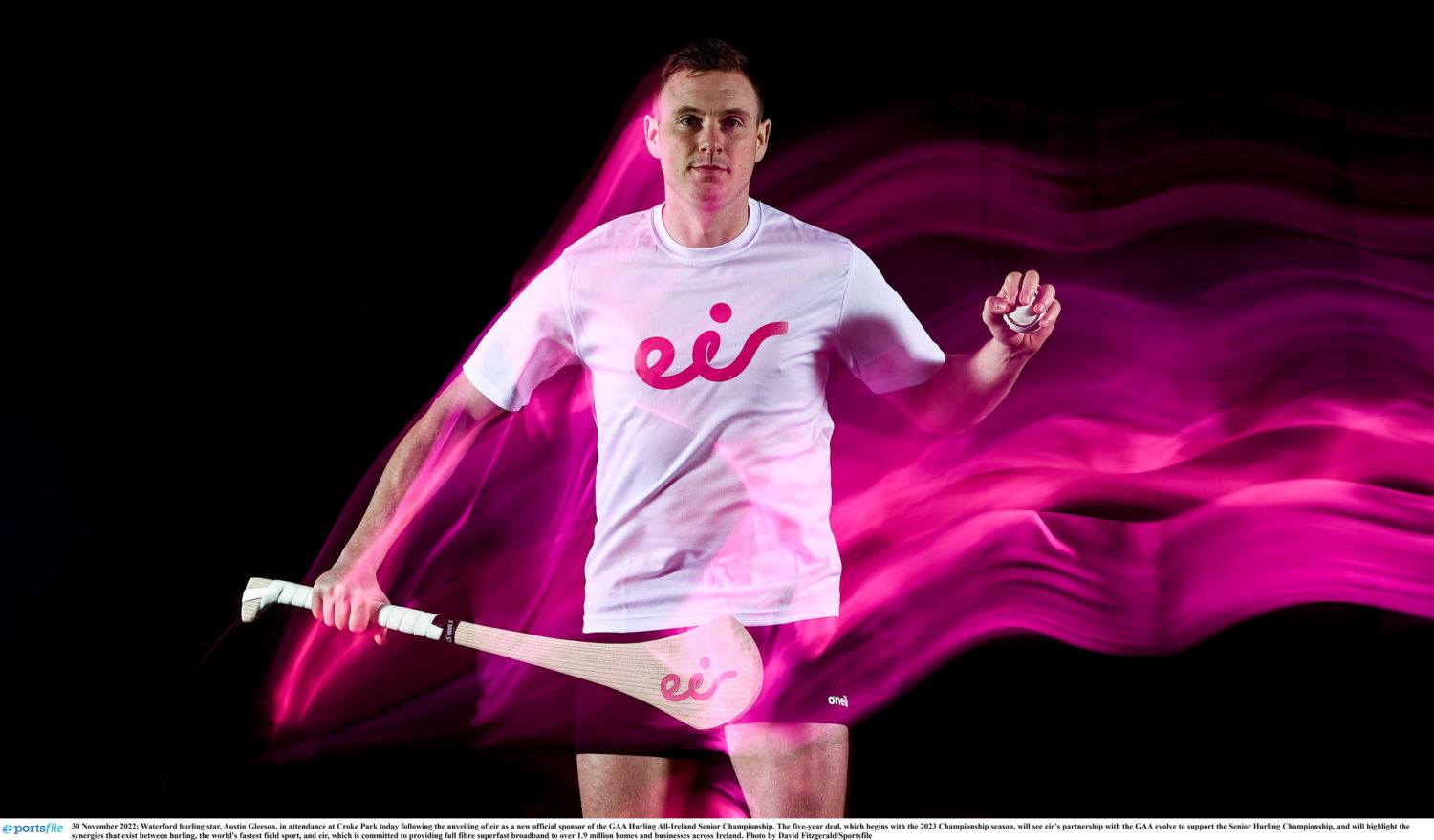 Waterford hurling star, Austin Gleeson, in attendance at Croke Park at the unveiling of eir as a new official sponsor of the GAA Hurling All-Ireland Senior Championship. Photos: David Fitzgerald/Sportsfile.

Waterford and Mount Sion star, Austin Gleeson, was in Croke Park this week at the announcement of eir as a new official sponsor of the GAA Hurling All-Ireland Senior Championship.
After missing out on playing in GAA headquarters in 2022, there’s no doubt that the former Hurler and Young Hurler of the Year will be hoping to back there in 2023, hopefully for an All-Ireland semi-final and final with the Déise.
Since he last lined out in the white and blue of Waterford things have changed massively with a whole new backroom team now in place under the leadership of Davy Fitzgerald.
So how have Austin’s early interactions with Davy been?
“To be fair, I think Davy, he is after meeting everyone once if not twice over the last number of weeks, going through certain things from previous years and what he wants next year, stuff like that. He is after putting a lot of time into Waterford since he got the appointment. We are extremely excited. You can see that after only four or five sessions on the field, where he wants us to go, and how hard he wants us to work, but we will have a laugh, an extremely good laugh along the way.”
“We were training last night, you had fellas out on their feet, then 40 seconds later they are laughing. You need to have that, you need to have the buzz with the hard. He said from the start we will train hard, but we will have a laugh. To be fair it is living up to what he is saying.
“There is a good atmosphere and a good buzz around. We have a good few new young lads in there too, bringing them in seeing what the training is like. I know a few of them got a bit of a shock when they came in with the step up, but they are taking to it now like a duck to water. It is exciting times.”
Enjoyment is critical according to Gleeson. “If you’re not enjoying it, it’s a horrible place to be, that is being honest. A few stages in my career over the last nine years I wasn’t enjoying it and it wasn’t a nice place to be. You are in the limelight because you are playing, when you know you’re in the limelight and not enjoying it, it’s hard because you’re not playing as yourself.
“You might be missing that bit of confidence or something like that. Once you’re enjoying it when you are in there you have to have the craic.”
Thankfully this Waterford squad is not short of characters which is vital in every team environment. “To be fair there is a few characters in our team, they make sure you are having a laugh in that dressing room. If you’re in a good mood they are buzzing around you, it is a good place to be. Having a few stories, having the craic, even making up a few lies in the dressing room about the fella sitting across from you, just having that kind of a buzz. It is a good atmosphere with a good group of lads there – they all work together and all work for each other. That is the key point about it.”

‘HOPPING OFF THE SOD’
It’s early days but already Austin is getting a good vibe of the Davy Fitz era. “We are only back a week or so with the Waterford team, you can just see the buzz on the field. Everyone is hopping off the sod really. The way the club went down here, the hurling finished first, then you had the football.
“We do have a lot of the lads that were with the likes of The Nire, Rathgormack, Ballinacourty, who played extremely competitive football down here until a number of weeks ago. The lads that were just hurling mightn’t have played since the start of September or the end of August.
“So they are hopping off the sod. Obviously going back in for your first session after a bit of a break you would be kind of nervous, trying to figure yourself out again, trying to make sure you’re not going to make a show of yourself, maybe.
“After a week or two everyone is back at it buzzing around the place. We are buzzing in the dressing room, having a laugh. Our group is like a club team to be honest, we are a wicked close group. It doesn’t matter who you are with, you will always have a laugh with them. I think that is one of the best parts about being part of this Waterford team, especially.”

‘GOOD RELATIONSHIP’
Austin though was quick to pay tribute to Liam Cahill, who took them to the 2020 All-Ireland Final. “His only full year was the last year (due to Covid). We had a good relationship to be fair, it might like from the outside that we didn’t, but we did. He did a lot for me personally and on the field.
“He gave it everything for Waterford, that is all we could have asked. At the end of the day he was going back to his native Tipperary which you can’t begrudge at all. If Waterford came knocking on my door, I would be the same. We had a good few years with him, it was an enjoyable few years.”

PROVINCIAL RECORD
All Déise fans and players are aware of Waterford’s terrible record in the Munster robin series. In the championships of 2018, 2019, and 2022 the Déise men have only registered one victory from 12 matches and it’s one the players are keen to change. “It is a bit of a mad one, I really don’t know why it is like that. It is something we have tried to figure out. We thought we were in a good place coming into the championship, but once again got caught in Munster and were eliminated before even playing out of Munster in the preliminaries or anything like that. It is something that none of us know the answer to.
“We have only won one game, drew one, and lost 10. It isn’t good enough really. We see ourselves as a good team that can compete on our day with the majority of teams, every team really. It is something we need to work on. To be fair there is a good management and backroom that are going to help us get that out of our heads.”
Let’s hope so… 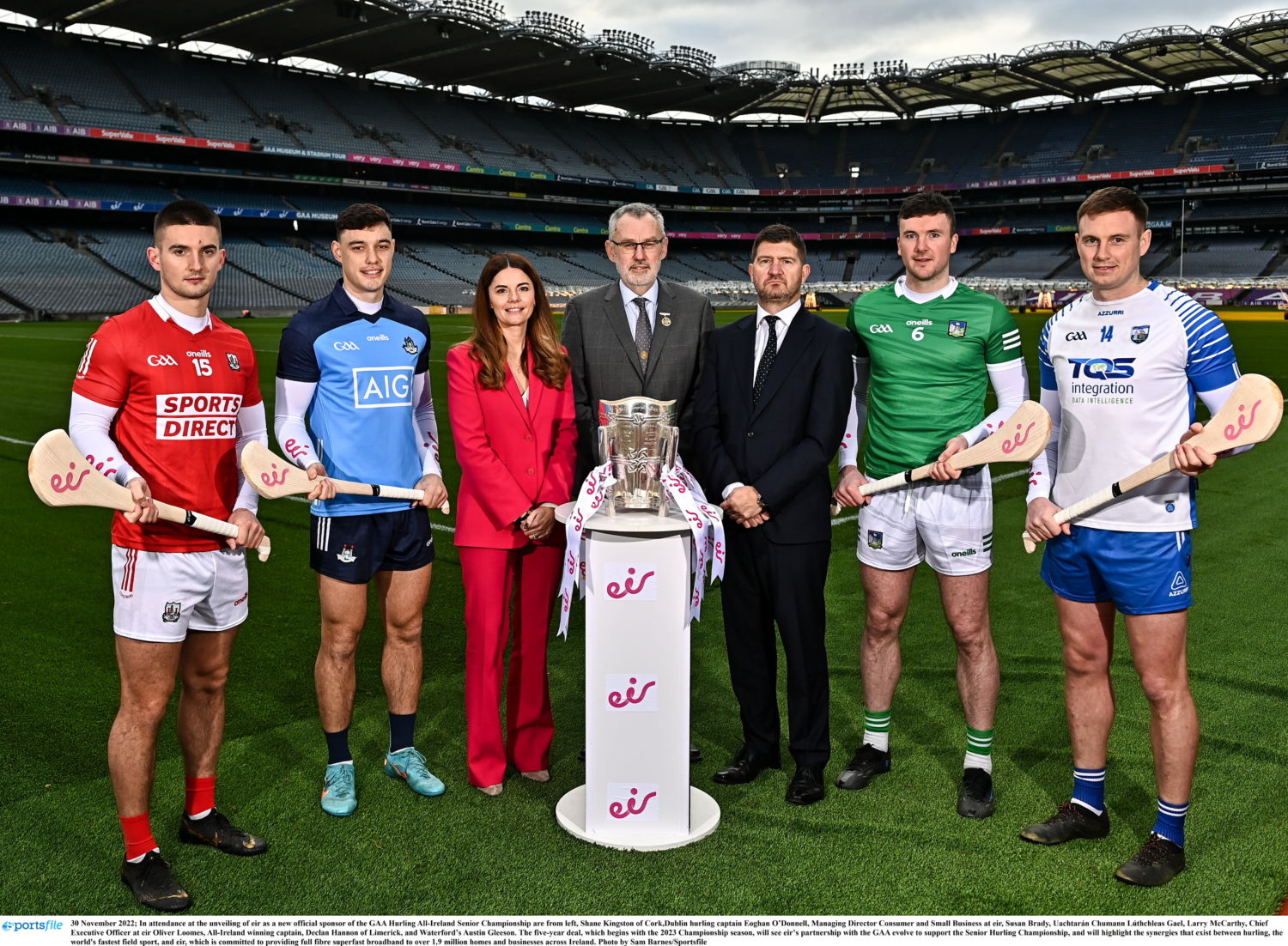 In attendance at the unveiling of eir as a new official sponsor of the GAA Hurling All-Ireland Senior Championship are from left, Shane Kingston of Cork, Dublin hurling captain Eoghan O’Donnell, Managing Director Consumer and Small Business at eir, Susan Brady, Uachtarán Chumann Lúthchleas Gael, Larry McCarthy, Chief Executive Officer at eir Oliver Loomes, All-Ireland winning captain, Declan Hannon of Limerick, and Waterford’s Austin Gleeson. The five-year deal, which begins with the 2023 Championship season, will see eir’s partnership with the GAA evolve to support the Senior Hurling Championship, and will highlight the synergies that exist between hurling, the world’s fastest field sport, and eir, which is committed to providing full fibre superfast broadband to over 1.9 million homes and businesses across Ireland.