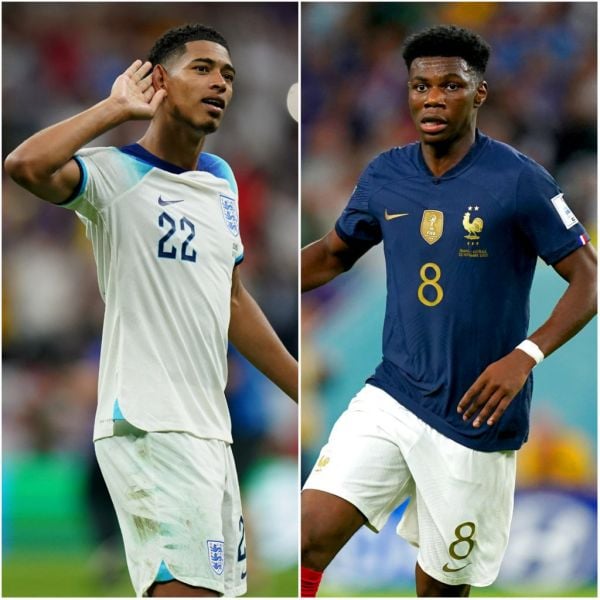 Jude Bellingham’s midfield battle with Aurelien Tchouameni will be crucial when England take on reigning champions France in their World Cup quarter-final on Saturday.

Here, the PA news agency assesses one of the key match-ups.

France were dealt two major blows when star midfield duo Paul Pogba and N’Golo Kante were ruled out of the tournament through injury.

But Real Madrid youngster Tchouameni has been one of the revelations at Qatar 2022, patrolling in front of the France defence and snuffing out attack after attack.

The 22-year-old only made his international debut a year ago but now has 18 caps to his name, having started all four matches of the World Cup so far.

He has been dictating France’s play from deep while allowing midfield partner Adrien Rabiot to wander into more advanced positions and offer support to Antoine Griezmann in the number 10 role.

Tchouameni is the top France player for distance covered per 90 minutes at 10.2km.

The 19-year-old has become England’s driving force in midfield. He is always making himself available for team-mates, with his tally of 108 offers to receive the ball per 90 minutes being the highest in either squad.

Tchouameni has showed for the ball 73 times on average per 90 minutes.

Bellingham is the more explosive of the two with his movement – third across both squads for number of sprints per match (61), behind Jack Grealish (66) and Phil Foden (63). Tchouameni has averaged 37 sprints per 90 minutes.

Apart from England’s Harry Maguire, Tchouameni has covered the least distance by ‘high speed sprinting’ among the outfield players in both squads (69m per match).

Bellingham has run almost four times as far (250m) at an equivalent speed.

But Tchouameni is France’s top passer, with 76 completed per 90, and is behind only John Stones (83) across the two squads. Bellingham has completed 49 passes per 90 minutes.