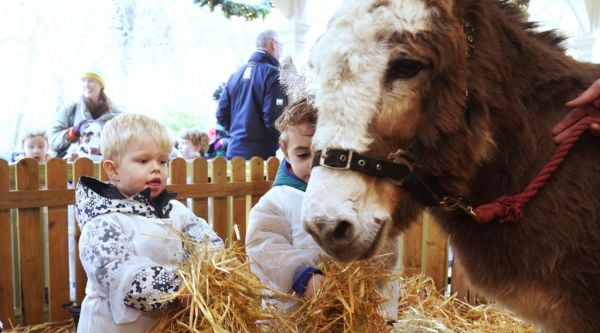 It follows a row over the Lord Mayor of Dublin’s decision to end the crib display at the Mansion House, where it has featured for more than 20 years.

The live animal crib was cancelled by mayor Caroline Conroy, a Green Party councillor, who said it was “good, but we can do better”, suggesting choirs, games, or a Santa postbox would be more interactive for children.

Following talks between the Irish Farmers’ Association (IFA), who supply the animals to the crib each year, and the Office of Public Works (OPW), it was decided that the crib would be placed in the summer house in St Stephen’s Green.

The farm animals will be tended to on-site every day by their owner and will be returned to their Wicklow farm in the afternoon.

Fionn Sherlock is following in the footsteps of his grandfather John and his great-uncle Joe Gallagher who have supplied the animals since the live animal crib first began in Dublin in 1995.

The crib will be open to the public until Thursday December 22.

Minister for Social Protection Heather Humphreys, Minister of State for the OPW Patrick O’Donovan and IFA president Tim Cullinan attended the opening of the crib at the summer house on Thursday.

The Dean of Christchurch Rev Dermot Dunne and Father Gary Chamberland from the Notre Dame-Newman Centre performed a blessing of the crib as part of the opening event.

And children from the YMCA creche on Aungier Street dressed up as angels and sang with the Lucan Gospel Choir.