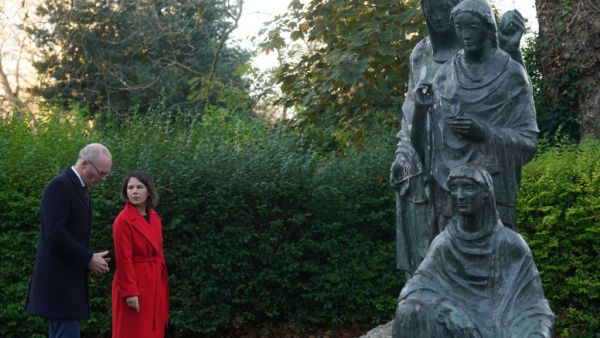 The UK’s decision to leave the EU’s single market and custom union “laid the foundation for the Northern Ireland Protocol”, a German minister has said.

Germany’s foreign minister Annalena Baerbock was speaking during a short trip to Ireland, before a subsequent trip planned for London.

Speaking at Iveagh House in Dublin with Foreign Affairs Minister Simon Coveney, she said that she would be taking a message to London that a “good” solution should be negotiated on the protocol.

Negotiations are continuing between the EU and UK to iron out the protocol which will ease trade from Great Britain to Northern Ireland, particularly in relation to agri checks.

The protocol, post-Brexit trading rules for Northern Ireland, was agreed to by the UK Government and the EU in order to avoid a hard border on the island of Ireland.

If negotiations fail, the UK is expected to pass domestic legislation that will unilaterally override trading rules, a move which the EU has said would be in breach of international law.

“We want this to work for everyone,” Mr Coveney said on Thursday.

“Brexit forced change, some of that change is not welcome.

“But the protocol is not about one side winning over the other. The protocol is about trying to get a deal that all sides can live with and work to.

“It’s been a process that’s gone on for too long, but as a result I think everyone knows where the landing zones are.”

Mr Coveney said he trusts vice-president of the European Commission Maros Sefcovic to negotiate a deal on the protocol that Ireland would be happy with.

Speaking in Dublin on Thursday, Ms Baerbock said there was “a window of opportunity” in EU-UK talks that “as I see it, we should all use and seize, all of us”.

“It is that message that I will take to London with me tomorrow because it was the decision of Great Britain to leave the single market and the customs union.”

She said that by doing this, the UK Government “laid the foundation for the Northern Ireland Protocol”.

She said that Ireland’s desire to “maintain and preserve” the free-flowing border between north and south should be respected, and that everyone must work together “to find a good solution”.

“That is, as I said, the message I will take to London tomorrow.”

Ms Baerbock is on a two-day visit to Ireland, which will include trips to Dublin and Co Wicklow.

Speaking about the cultural and literary significance of Ireland, and the respect German pupils have for Irish writers like Oscar Wilde, she said that there were political lessons Germany could learn from Ireland.