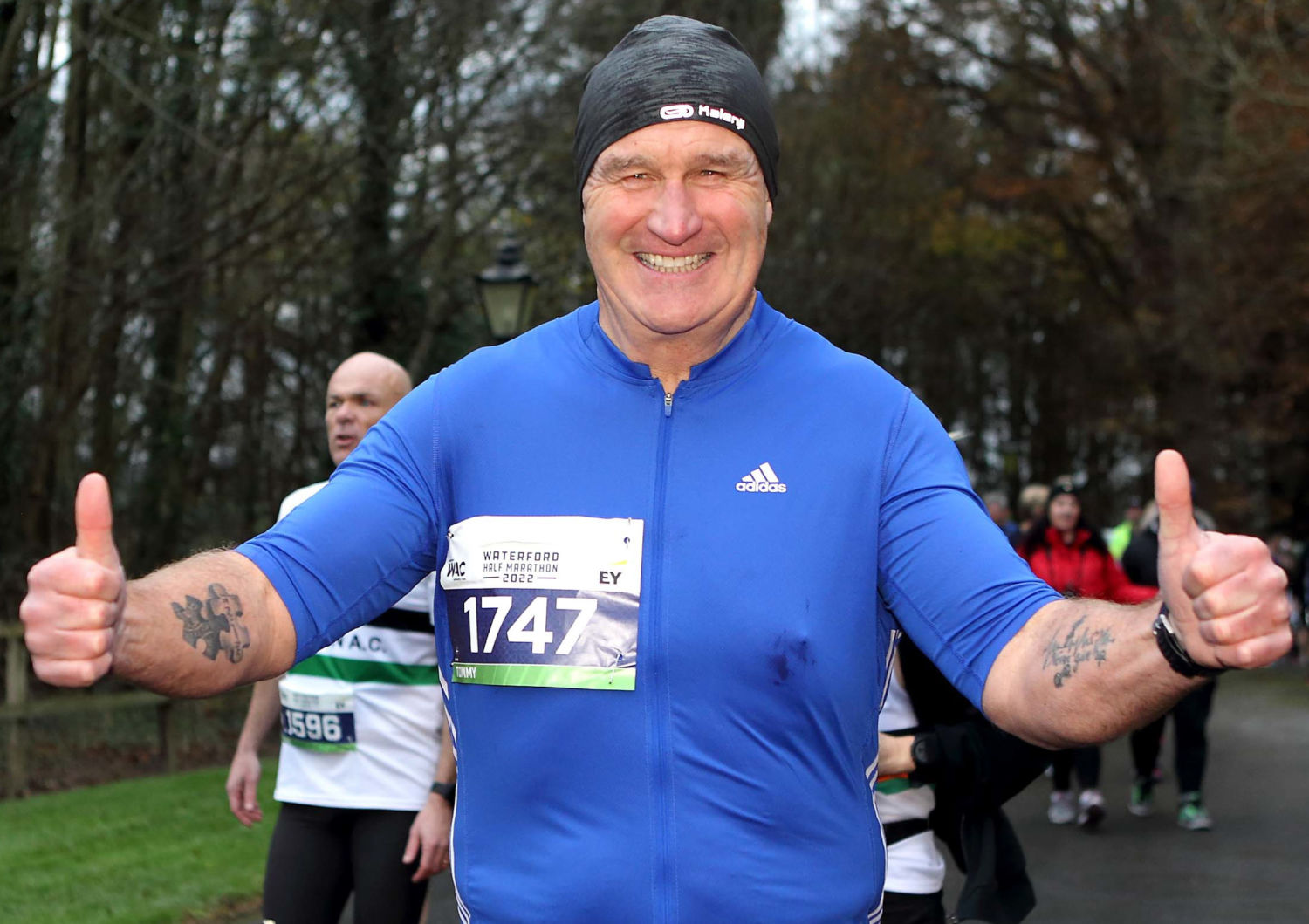 A big thumbs up from Tommy O’Dwyer before the start of the Waterford AC Half Marathon. 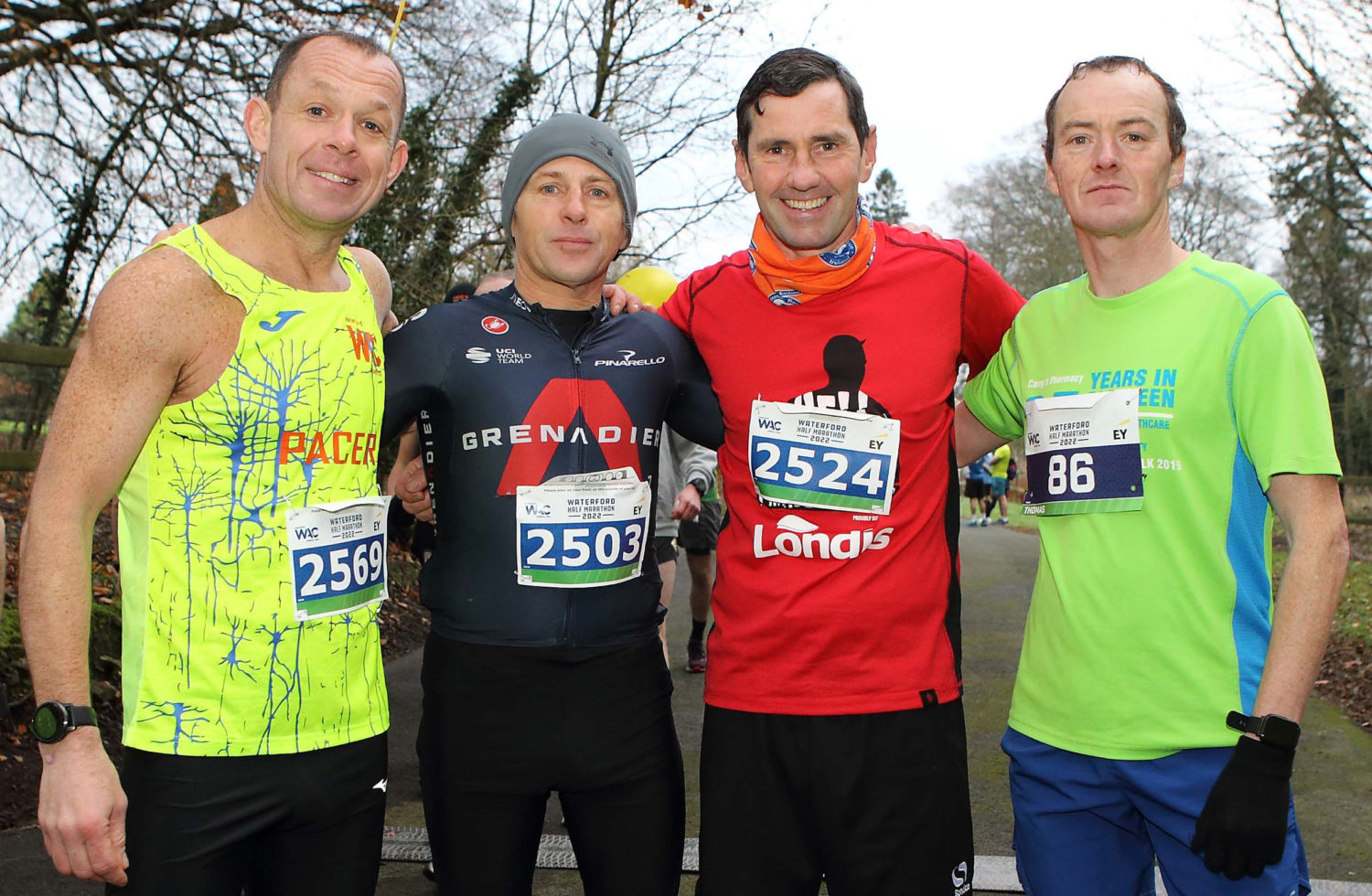 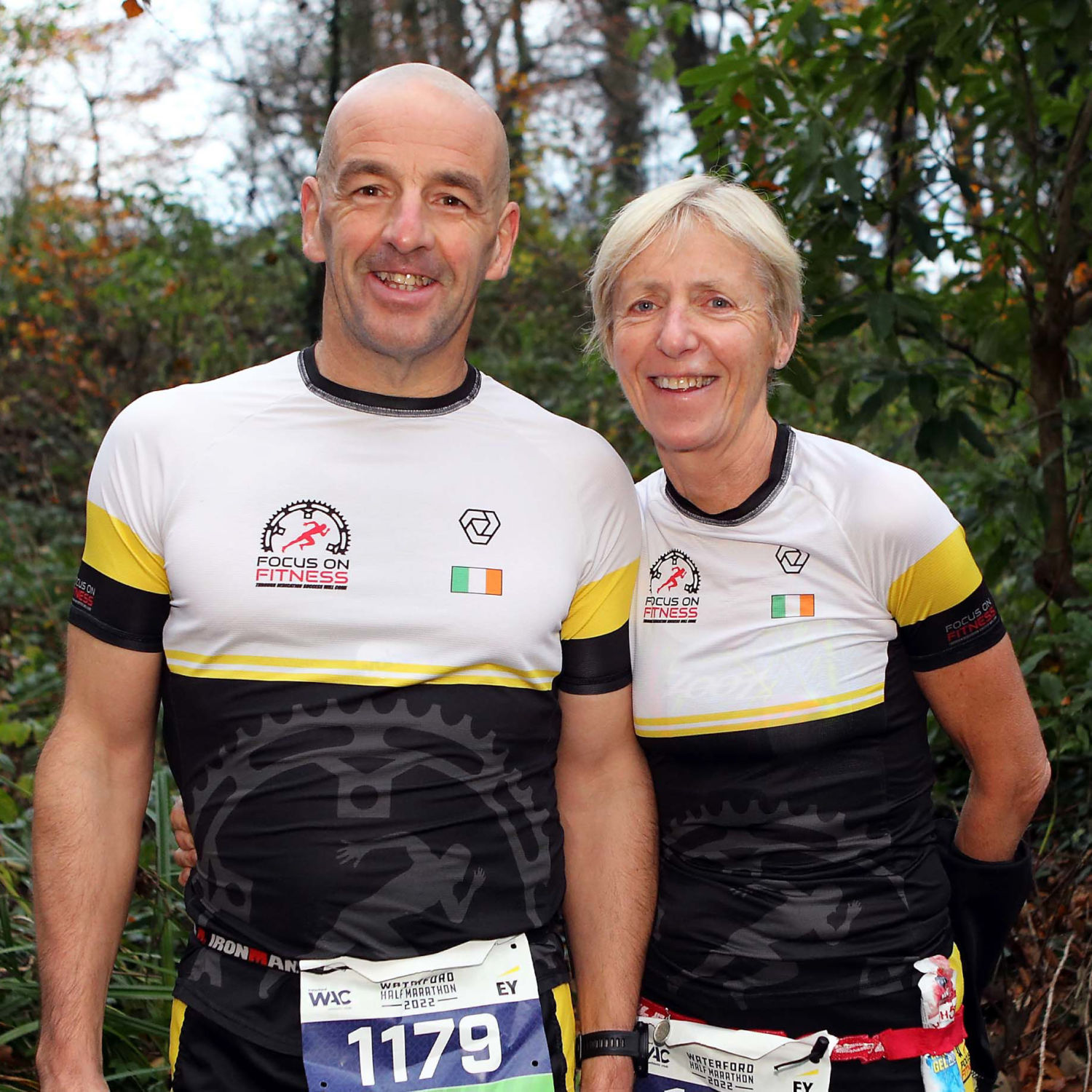 Martin Kirwan and Siobhan Kennedy from Focus On Fitness. 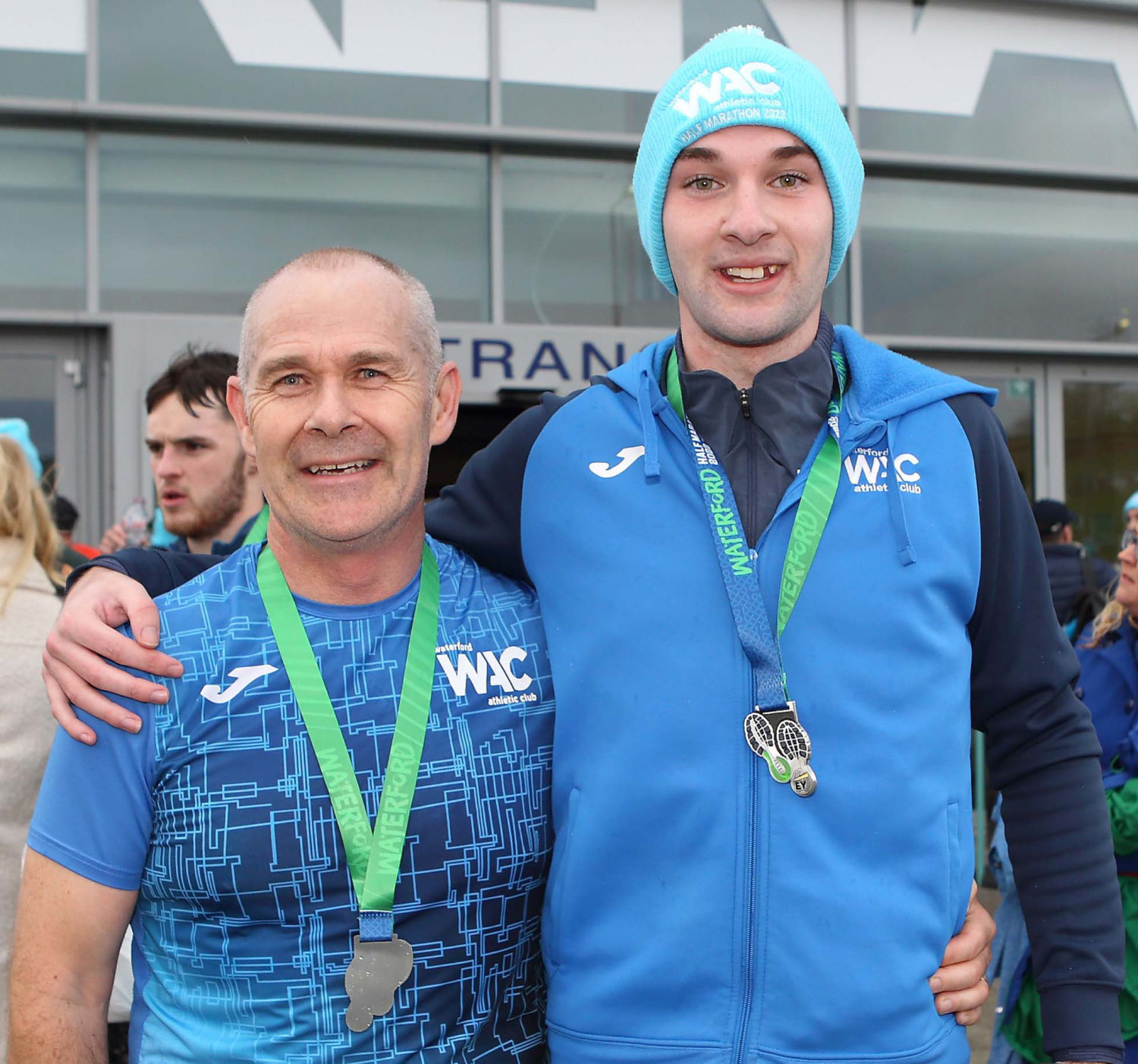 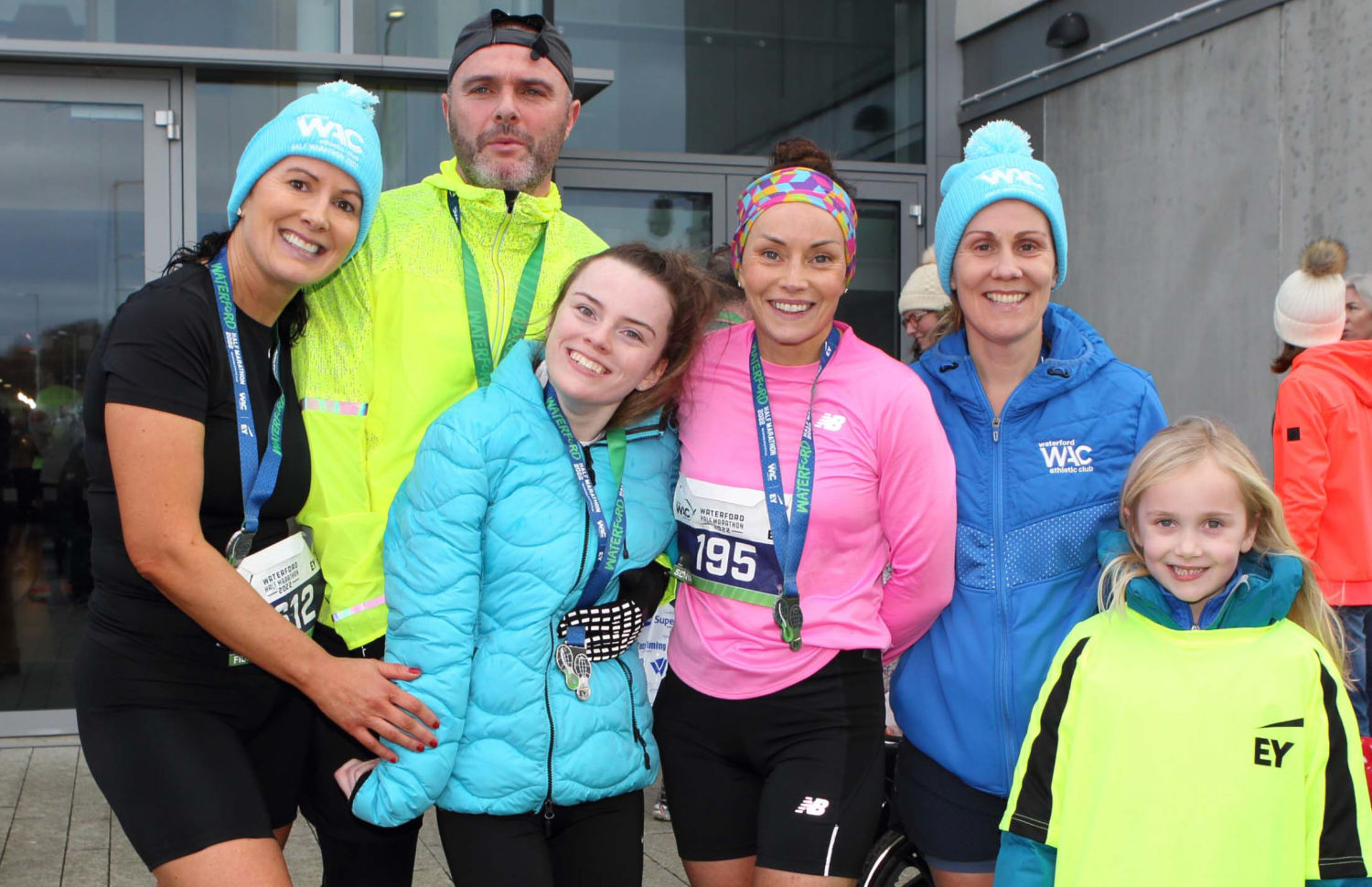 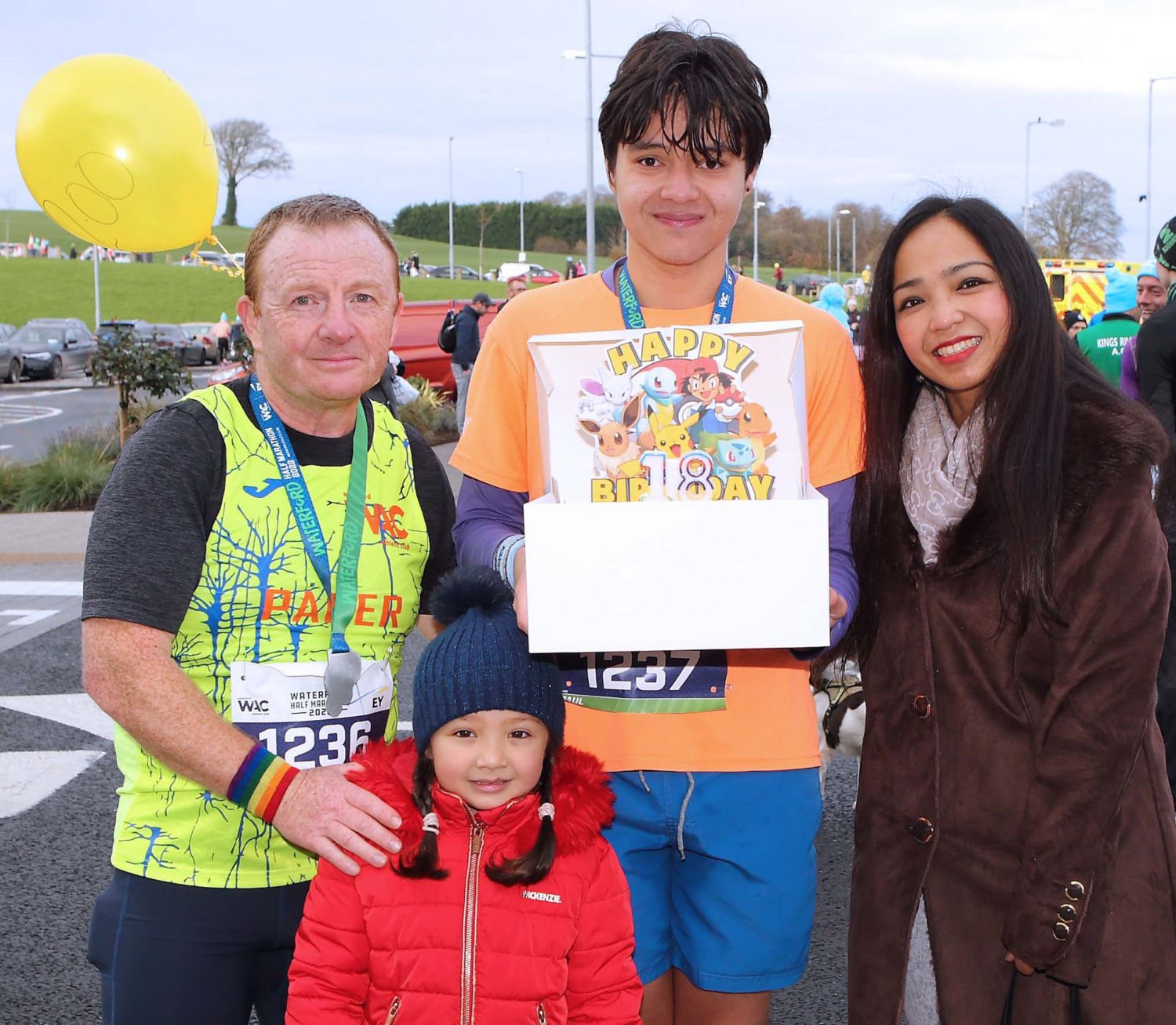 Wayne, Bew and Misty Lee pictured with Paul Lee who celebrated his 18th birthday by running in the half marathon. 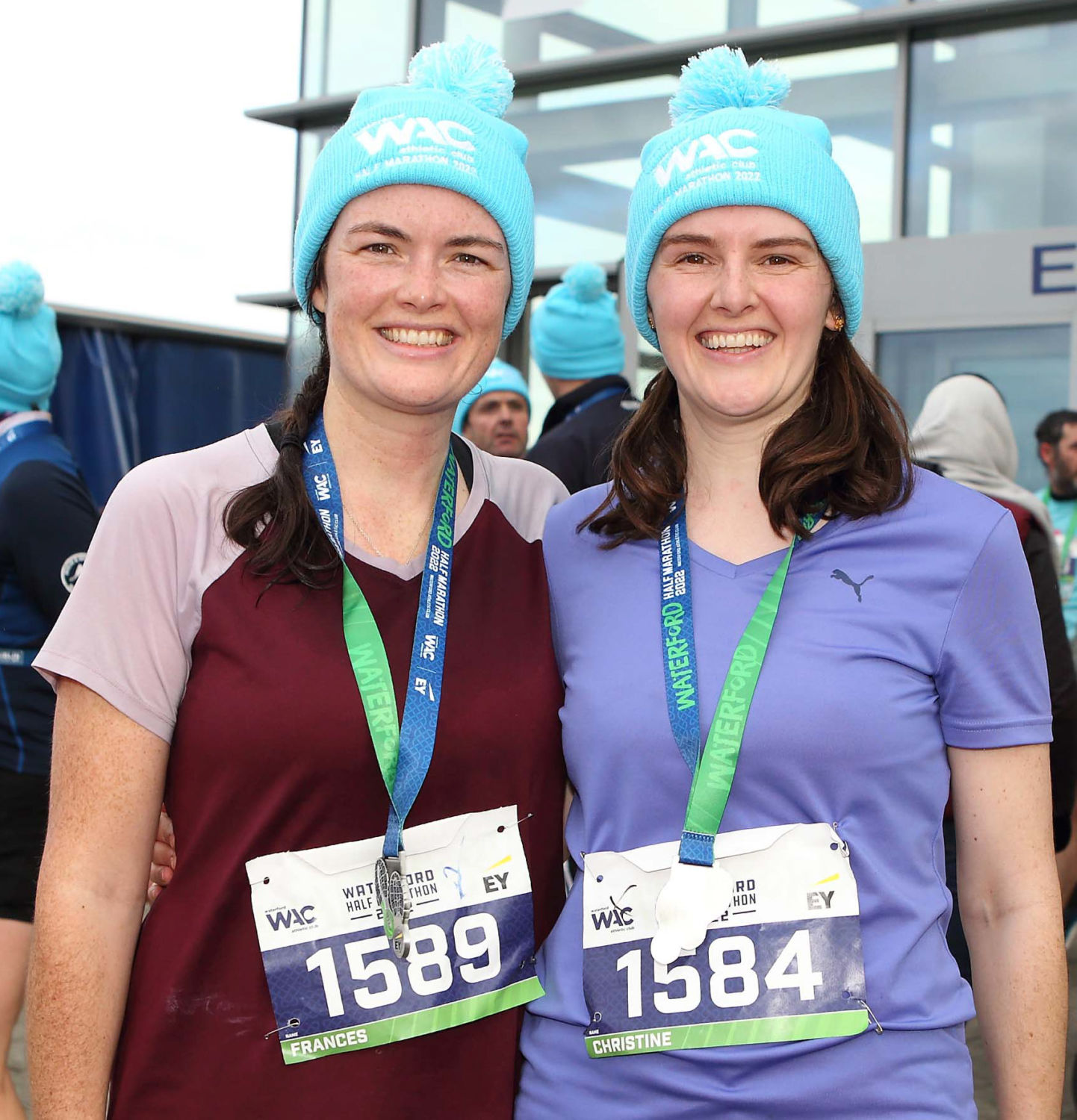 Christine and Frances Murphy from Ballygunner. 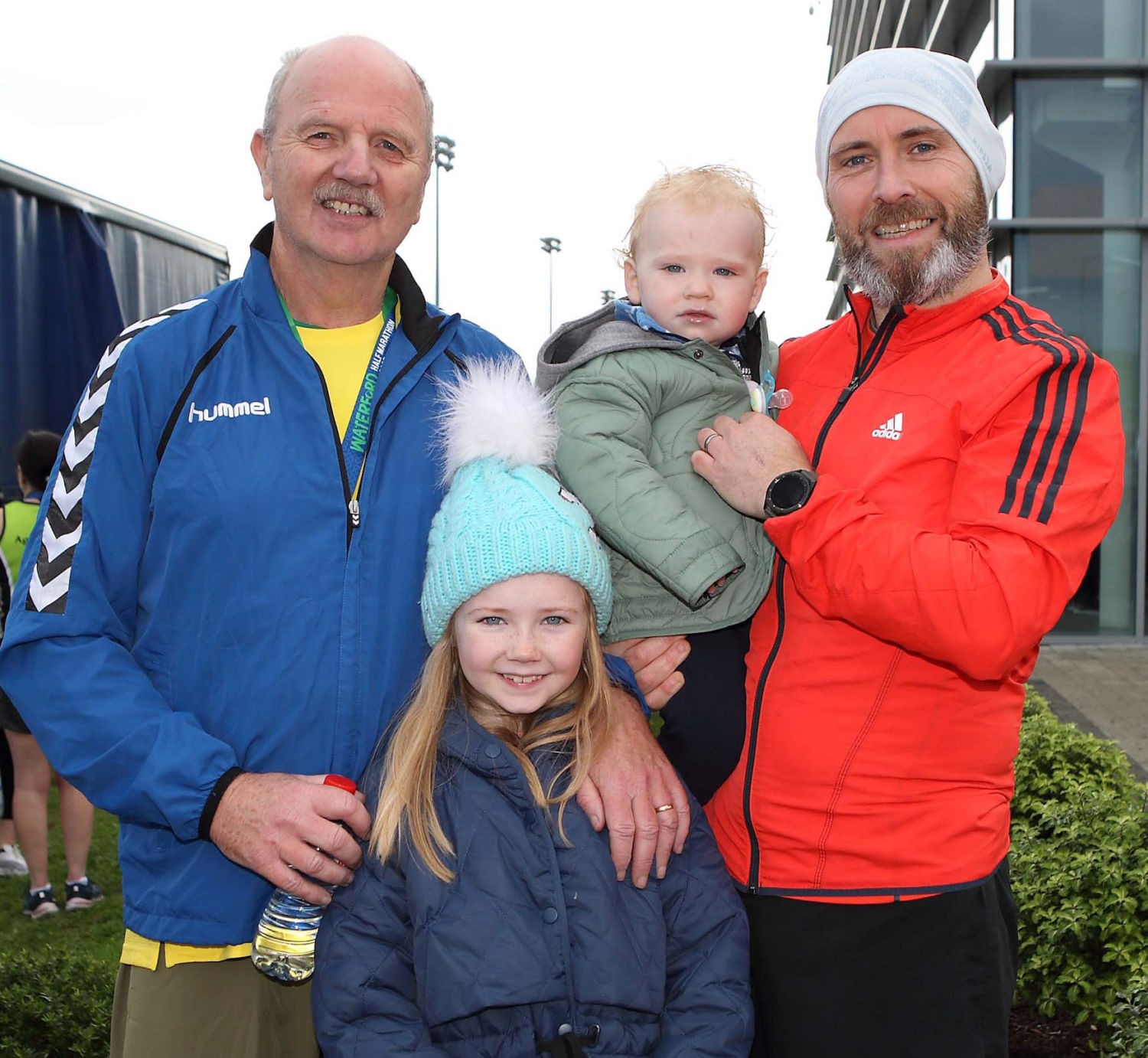 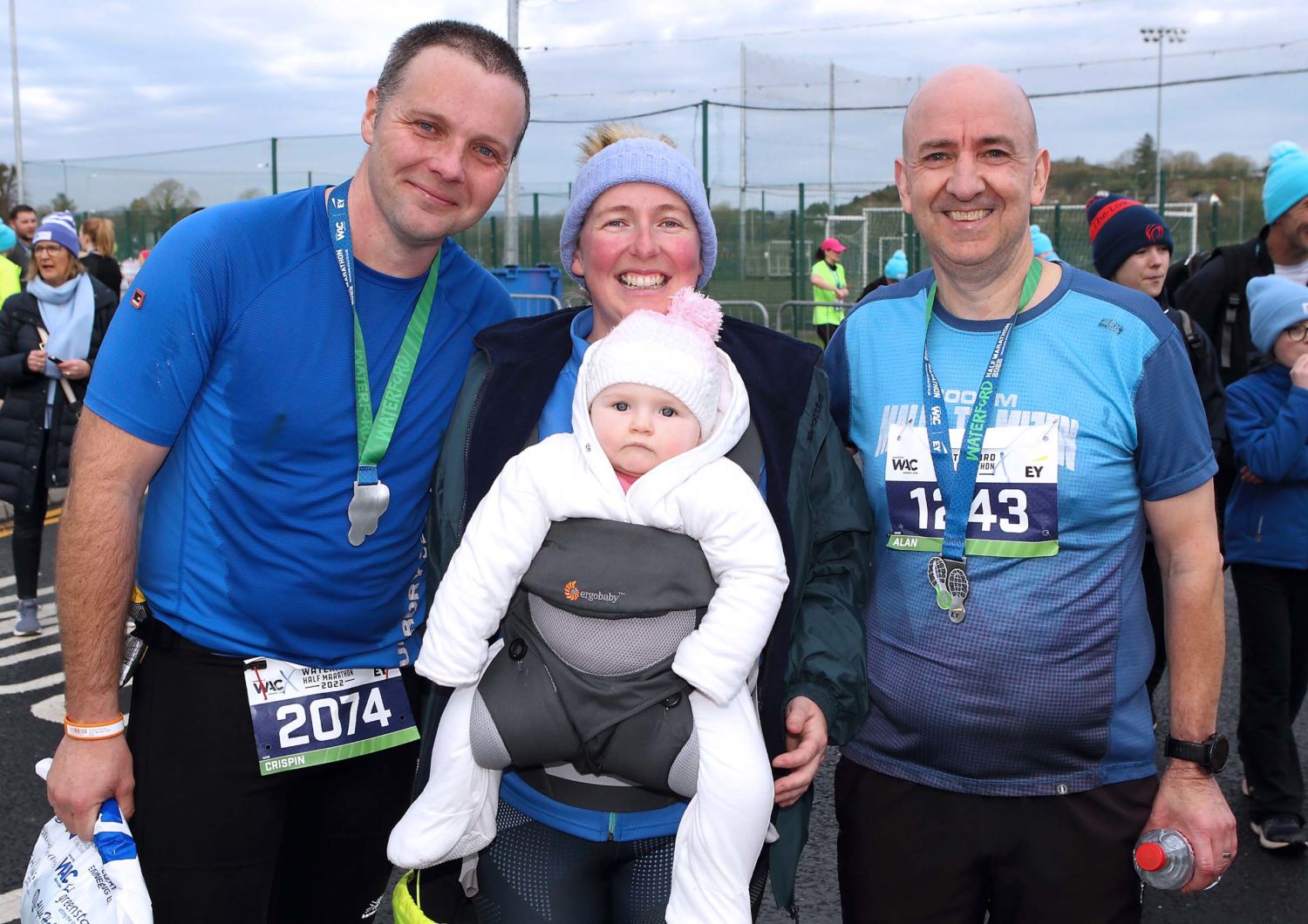 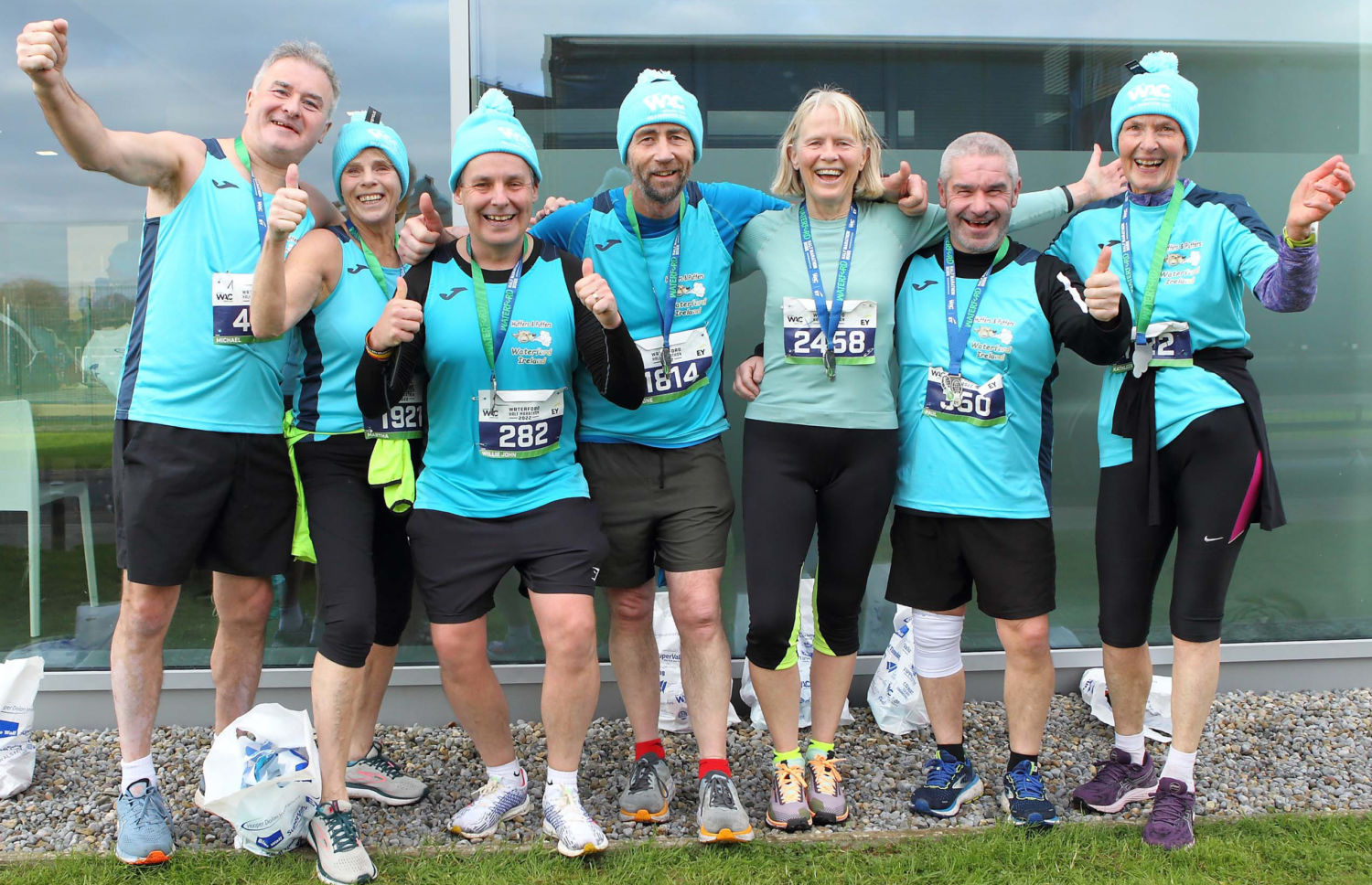 The Huffers & Puffers from Waterford. 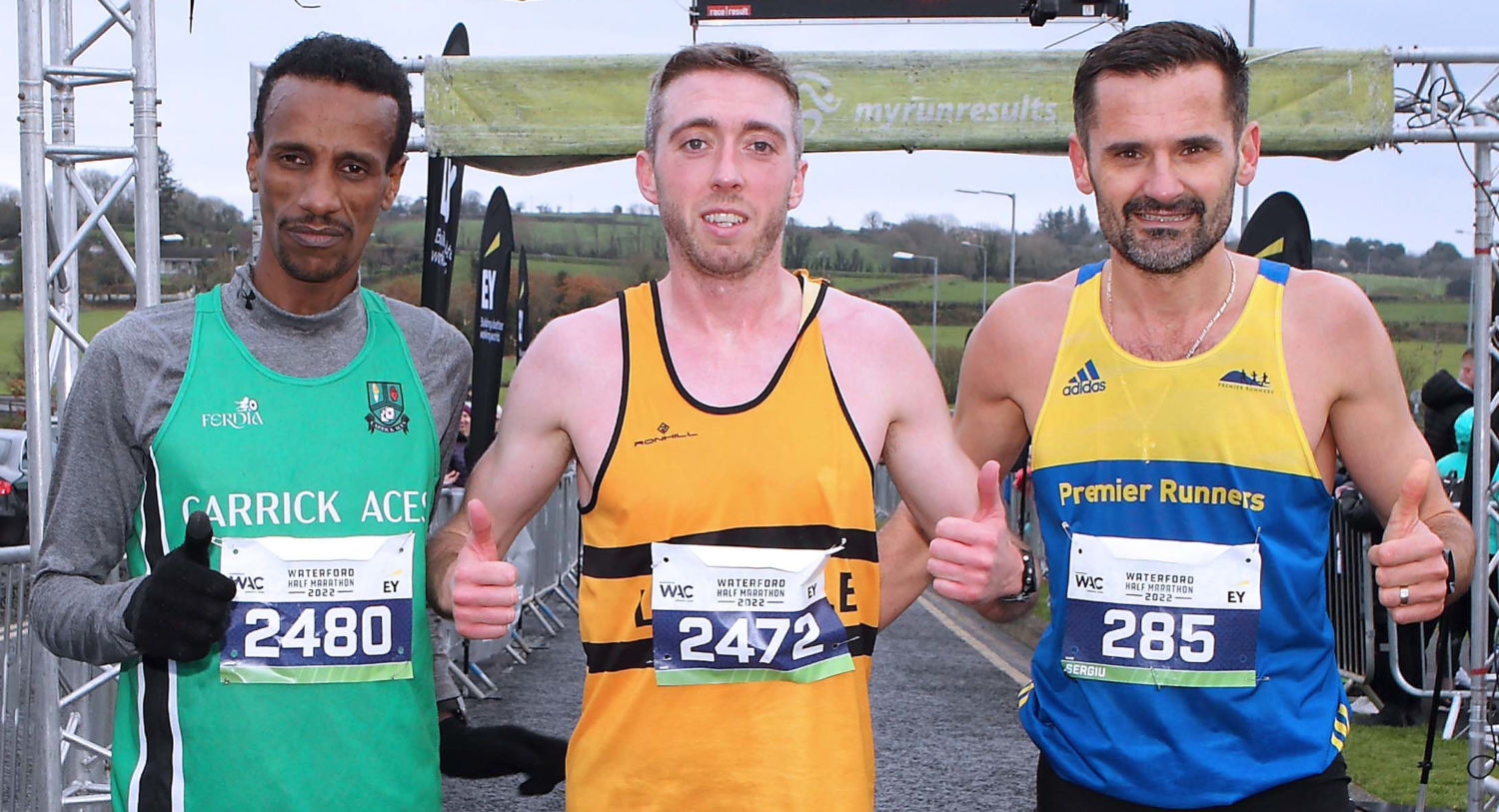 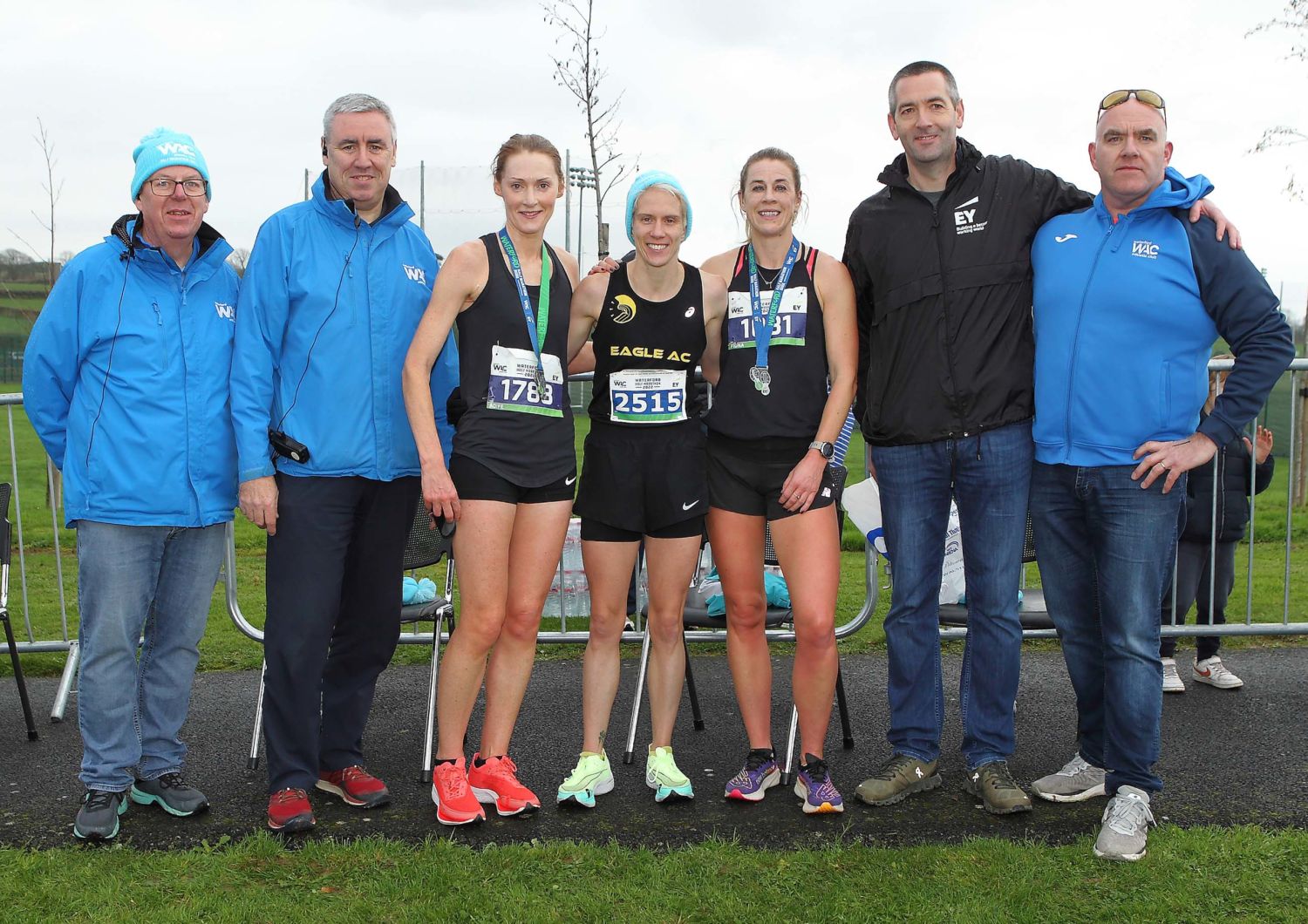 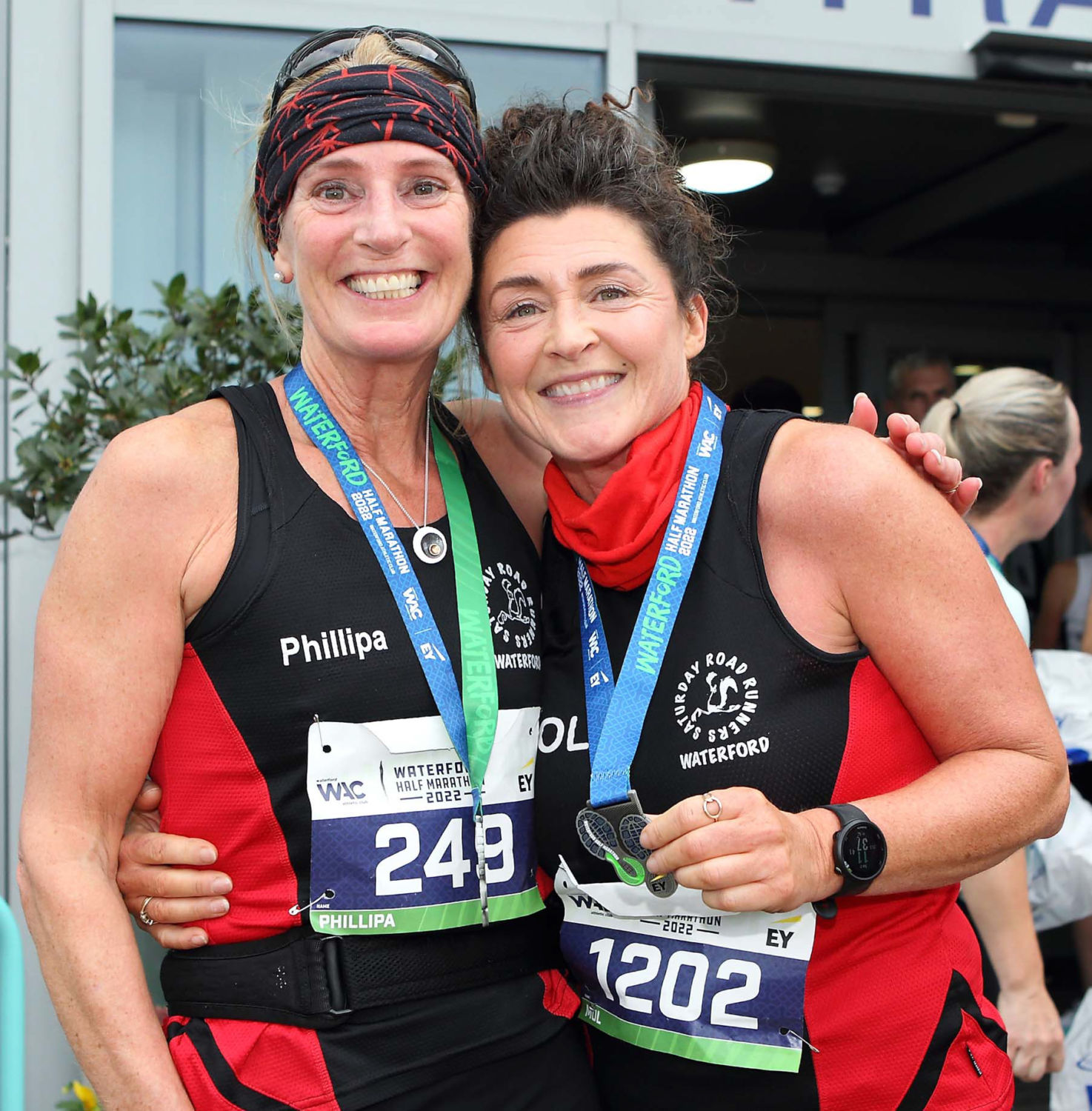 The EY Waterford Half Marathon went ahead last Saturday despite a blow midweek when news was received that the original course chosen would not be allowed but not to be denied Chair Trevor Walsh with the support of many practically overnight found a new course and a great event was organised on Saturday with around 2,000 competing
The facility of having the SETU Arena for start and finish made this ideal for runners giving them all they need from an event and helping create an incredible atmosphere. Car parking, Race HQ and close proximity to both the start and finish lines were all part of what makes a top venue. The amount of marshals and coordination from Waterford AC members and local Gardai also was very evident. The race itself brought out some big guns and well known athletes as can be seen from the top results. For much of the race it was a tight affair in the men’s race but Ryan Creech of Leevale AC pulled away after 10 miles or so for a fine performance winning in a time of 65:02, former winner Jared Derese of Carrick Aces Monaghan was second in 65.49 and 3rd was Sergiu Ciobanu of Clonliffe Harriers in 67.18.The women’s favourite Olympian Aoife Cooke of Eagle AC excelled and ran a great time of 72:58 in winning the ladies section easily in 2nd place was Fiona Kehoe of Kilmore AC Wexford in 79.31 and 3rd was Aoife O’Leary of Sportsworld RC in 81.32, the first Waterford athlete home was Noel Murphy Waterford AC in 8th place in 72.03 and Joe Gough West Waterford AC had a terrific run to win the o 65 section in 1.27.54. In the men’s team competition 69 teams took part and Sli Culainn won the with Waterford AC 2nd (Noel Murphy,Pat Fitzgerald and Paul Wyse) and Watergrasshill won the women’s with an entry of 55 while the legendary Gerry Forde Blarney Inniscarra the sole wheelchair athlete took that award fit it in just before. Well done to all participants for contributing to a great day.

Waterford AC had great help on the day from the many Gardai, the Stewards doing many different jobs, Order of Malta, Waterford City and County Council, the event Doctor Harkin, Caulfields Supervalu, Panda Waste, Brophy Transport and our road crew Conor, John and Jamie, management and staff at SETU, Pacers etc not to mention the long hours prior to the event spent by the Chair and many helpers and of course our main sponsors EY and the Race timers. My Run.ie. The main people however are those that competed regardless of where they finished, well done to one and all.