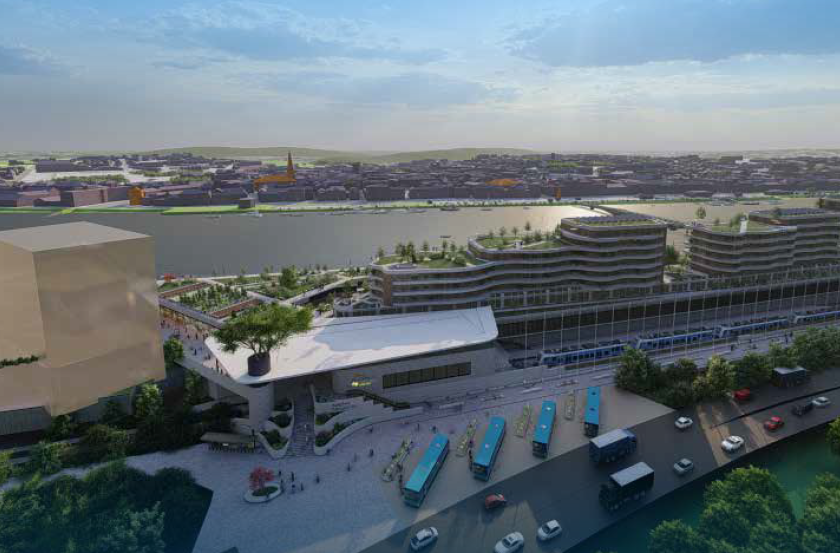 This is a time of year for reflection and to take a little pause for thought. So when you read this after the big Christmas blow-out you can relax and reflect upon the issues raised here. This is also the time when we think about the wider world but especially the community we live in.

It gives none of us any great pleasure to be negative about or criticise local politicians. After all, we know the people and they live among us. Politics is a difficult game and we elect people because they tell us (and we believe those we vote for) that they will look after our interests. We make a pact which is called to account every few years in a general election.  They deliver, hopefully and we elect.

The big delivery in 2022 was a massive €170m for the North Quays which enabled a contact to be signed with BAM for a new bridge, transport hub and the required project engineering work to facilitate farther development.

Property transfers on site between the council and the preferred developer are further evidence that the project has moved from the aspirational to the delivery stage. When work gets fully underway in early 2023 we can expect a lot of the naysayers to be silenced.

There is often justified criticism of some people in Waterford for being negative about State projects, but we have learned the hard way to be justifiably sceptical about the willingness of the state to deliver projects in this area.

The mountain, as we know, is very often in long term labour without producing very much except more promises and delay in process.

Maybe the North Quays will break the cycle of hopes being delayed until all the good is squeezed out of things?

In a three-way coalition of FF, FG and Greens there was much talk from the FG side of supporting the North Quays but it’s of some interest that the delivery came with an FF Taoiseach and minister.

Before anyone accuses the column of being pro-FF, it would have to be said that there is more than a sneaking suspicion locally that Waterford city does not figure highly in the FG thought process.

The party is embedded in the large farm heartland of Wexford and Carlow/Kilkenny and the party in Waterford seems often to have been spilt between the same interests in West Waterford and a more proletarian electorate in the city. The latter often appears to have more in common with FF and Labour than the aristocratic FG princelings produced elsewhere.

At a time when money is plentiful in government the funding for the North Quays marks the first large scale (in our context) funding for the city, but that’s what the Ireland 2040 Plan promised.

After more than a decade of having Martin Cullen as cabinet minister and close to the heart of power, the change was abrupt and brutal.

We had two Fine Gael TDs – John Deasy whose contribution could best be described as negligible and Paudie Coffey who was an excellent, well regarded and hard-working TD.

In the face of heavyweight politicians elsewhere in the region, whose antipathy to our city was barely concealed, Waterford seemed destined to receive only those national programme investments.

A new courthouse and a new fire station for example were delivered as part of national programmes to upgrade such facilities.

New industry did arrive and was welcomed with open arms but could never be described as comparable to the jobs and investment tsunami which dropped on Limerick while Michael Noonan lurked in cabinet.

This is the issue that government and FG in particular face after the change in the office of Taoiseach.

Micheál Martin has the North Quays as evidence of FF delivery to Waterford even while his party colleague Stephen Donnelly as Health Minister has been gracious in his praise of UHW without delivering the headline funding needed at our Model 4 hospital.

Government money is spread all over the place in terms of ‘small’ stuff, a hundred grand to a sports club here, a million to a new school or road works there.

These well received and positive investments are the bread and butter of Irish politics. Waterford has in fairness, seen a lot of this, including some impressive investment in the Greenway, but the delivery of the big things that set the city apart from the provincial towns across the South East and positions us on some par with our peers in Limerick and Galway, are still awaited.

Investment in SETU third level facilities and in UHW still lags and unfairly so. Leo Varadkar, now in his second term as Taoiseach, more than most, knows the score for Waterford.

We have four TDs in this constituency and an FG senator hopeful of further progress. While Matt Shanahan has talked himself blue in the face while demonstrating the deficits in this area, Minister of State Mary Butler is our only bit of tangible political influence.

It is not obvious that Marc Ó Cathasaigh has truly leveraged his position as Green Party whip and David Cullinane has dedicated himself to the national politics of Sinn Féin.

It remains unclear at this stage if SF really would provide 24/7 cardiology at UHW if in power as they still talk of “clinical advice”.

Deputy Butler, on whom so much depends, has carved out a niche for herself as Minister for Older People and Mental Health, but there are three huge projects with planning permission affecting UHW as well as her own “pet” new Psychiatric Unit at UHW which await funding. Has she the grit to expedite them?

Mr Varadkar has retained Simon Harris as Minister for Further Education. They both know that SETU/WIT has been disgracefully treated (the new engineering building and Crystal  site) over the past decade for funding and development. At the end of 2022, we’re still waiting for that humiliation to end.