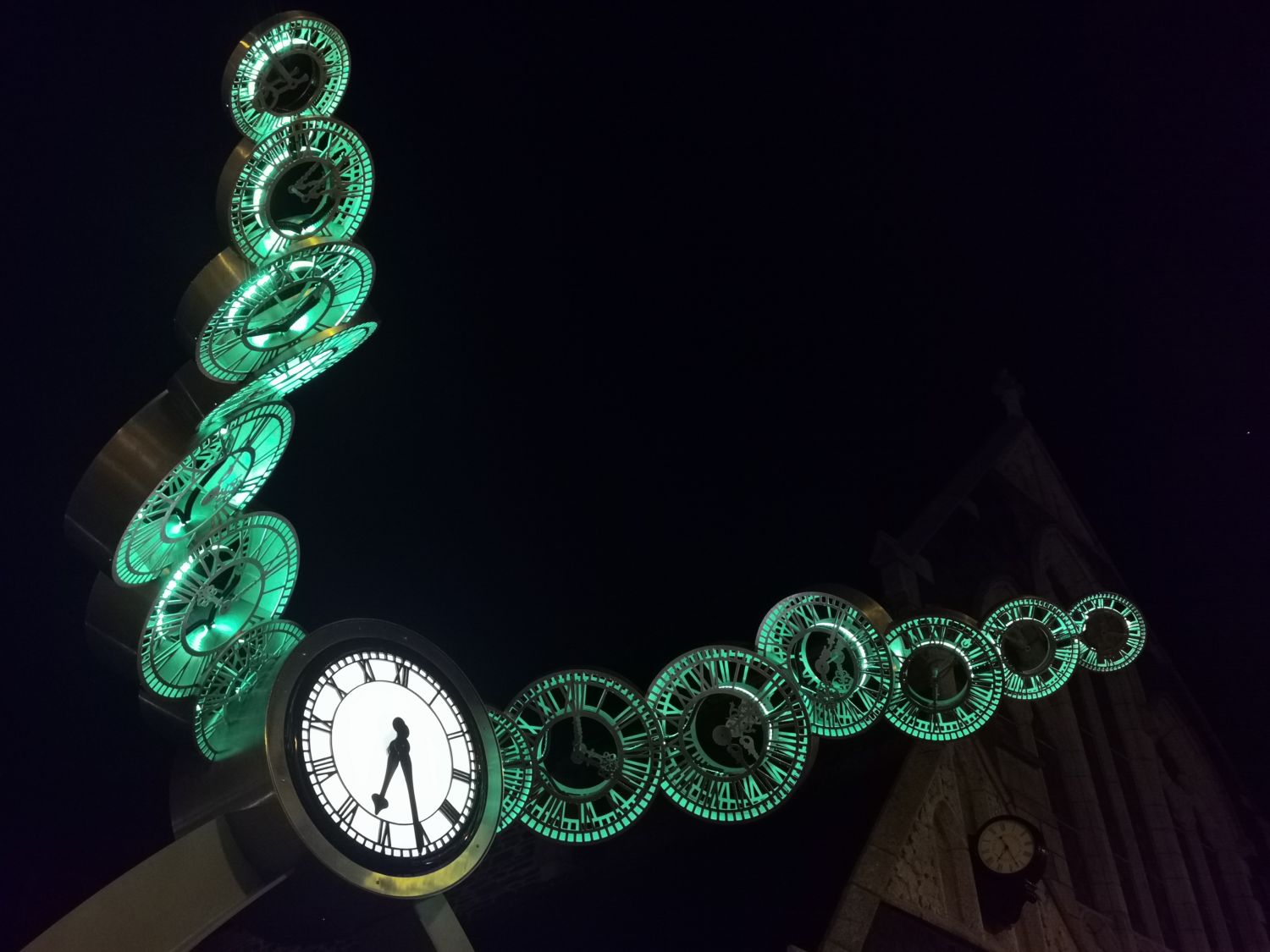 Our new public clock, ‘Tempus Fugit’ (Time Flies) reminds us that no other town or city waits for us to catch up.

It’s amazing the things you read between meals at Christmas. On piece of interest comes from Dusseldorf in Germany.

From November 2 1811, Emperor Napoleon stayed there for three days. He was given a festive welcome with military honours. For his state visit, Napoleon’s minister Pierre-Louis Roederer wrote to his wife that the festivities in Düsseldorf had been the most glamorous of the Emperor’s state trip and described the city as Little Paris.

From Düsseldorf, Napoleon travelled on to Cologne (much older and bigger), where he is reported to have said: “Go to Düsseldorf and learn there how to receive an emperor.” Napoleon’s visit had positive effects on Düsseldorf in terms of urban development.

A few days after his visit, the emperor issued the so-called “Beautification Decree”, on the basis of which the demolition of the city fortifications, begun in 1801, received new impetus and public works commenced to beautify the city.

In a hazy overview of Waterford history remember a decision taken in 1705 by a local grand jury to demolish the medieval fortifications along our quays thus creating what was described as the “Noblest Quay in Europe”. This was the fashion at the time, as the city was expanding rapidly.

Waterford city had just had two Huguenot mayors, Simon and Patrick Vashon and presumably their influence on town planning in Waterford was seminal. The demolition of the walls along the quays was followed by a move by the City Council from the Guildhall (junction of Broad Street and Peter Street) to the new exchange building in 1713 on the site of the present Ulster Bank.

Many new buildings, including two cathedrals and Assembly Rooms (now City Hall) on The Mall followed over that century as Waterford turned itself from an inward looking medieval city to an outward looking city facing the river frontage.

In his book on James Gandon (Vitruvius Hibernicus), Dr Edward Mc Partland of TCD suggests that Waterford was perhaps the only city outside Dublin which fully expressed its civic dignity in the 18th Century with appropriate buildings.

As we face into the end of the first quarter of the 21st Century, we might ask what Waterford city might do with a beautification decree from its public authorities?

The North Quays when fully developed will transform the appearance of our city. That work will commence this year but its completion is some way off. What might we do with our old city now, with a Napoleon in command?

The Viking Triangle is instructive. For decades it was left to decline. Its old houses and spaces left behind in a rush to the suburbs. Slowly but surely it is reclaiming its importance as the cultural heart of Waterford. The museums are a delight and with over 100,000 paying (remember that, paying!) visitors this year show how the tide is turning.

A new Museum of the Irish Wake will open this year. A new public clock, aptly called ‘Tempus Fugit’ (Time Flies) reminds us that no other town or city waits for us to catch up. We must carve out our future for ourselves. It is self-evident that we cannot tolerate dereliction or decrepit properties in the city.

“It is self-evident that we cannot tolerate dereliction or decrepit properties in our city.”

The awful remains of the Ard Rí Hotel dominate views from the quays and despite a long apologia from its owner on WLR before Christmas the conventional wisdom is that we are looking at decades long property speculation rather than development options. On the quays we still have the remains of a 1970s petrol station canopy.

Beautification? What would Napoleon say about the connection between private ownership and public responsibility to the city? Waterford can only progress with a united front to make the place look as it should. The Viking Triangle shows the way.

Lombard Street is a tragedy and a pile of awful concrete resting against the gable end of one building there is perhaps the worst urban eyesore in Ireland. There are planning issues involved, but such is not the case with the buildings surrounding the once lovely Royal Bar. There is no excuse for allowing these buildings fall into dereliction and a notice from Council on the King’s Bar directly opposite, shows that City Hall is at least aware of the situation. On the Dunmore Road the gaunt ruins of the former Power’s Seeds are a monument to development inertia. The roofing was removed recently and hopefully this saga of neglect is near an end.

On the Cork Road a shabby garage next to Sheridan’s is an insult to all the other car dealers in that area. Further in towards the city the appalling ruins of the glass factory offices poke a finger in the eye of civic responsibility.  On Manor Street, the disgraceful Shefflin’s Pub ruins the whole streetscape.

At the Car Stand and John Street junction, a terrace of what were once nice shops including Boston Cleaners, Sinnott’s Records, Delicato’s restaurant etc have degenerated into awful ugliness. Is paint and maintenance that expensive?

In the public realm, much has been achieved, but much remains to be done, there is no programme of tree planting except by the Lions Club. Overhead wires which compromise the street views in many areas have been further added to by being festooned with broad band cables.

Mayor’s Walk, Barrack Street and John’s Hill being cases in point as prosaicness in the older parts of the city is exacerbated by utility companies interested in nothing but their own convenience.

Terrible concrete pavements have become de rigueur often in the most sensitive places. The atrocity built outside the 300-year-old St Patrick’s Church in Patrick Street is surely the winner of this year’s prize for grotesque ugliness.

We need a street by street analysis. The list is not endless and that’s the point. A determined push could achieve an awful lot. Many nice things have happened in our city and the national perception is improving by the day.

Maybe 2023 is the year in which all property and business owners in eth city will ask themselves “what would Napoleon say about my stuff?”

We need a beautification decree and we need public and civic pressure from all sides to have it carried out!