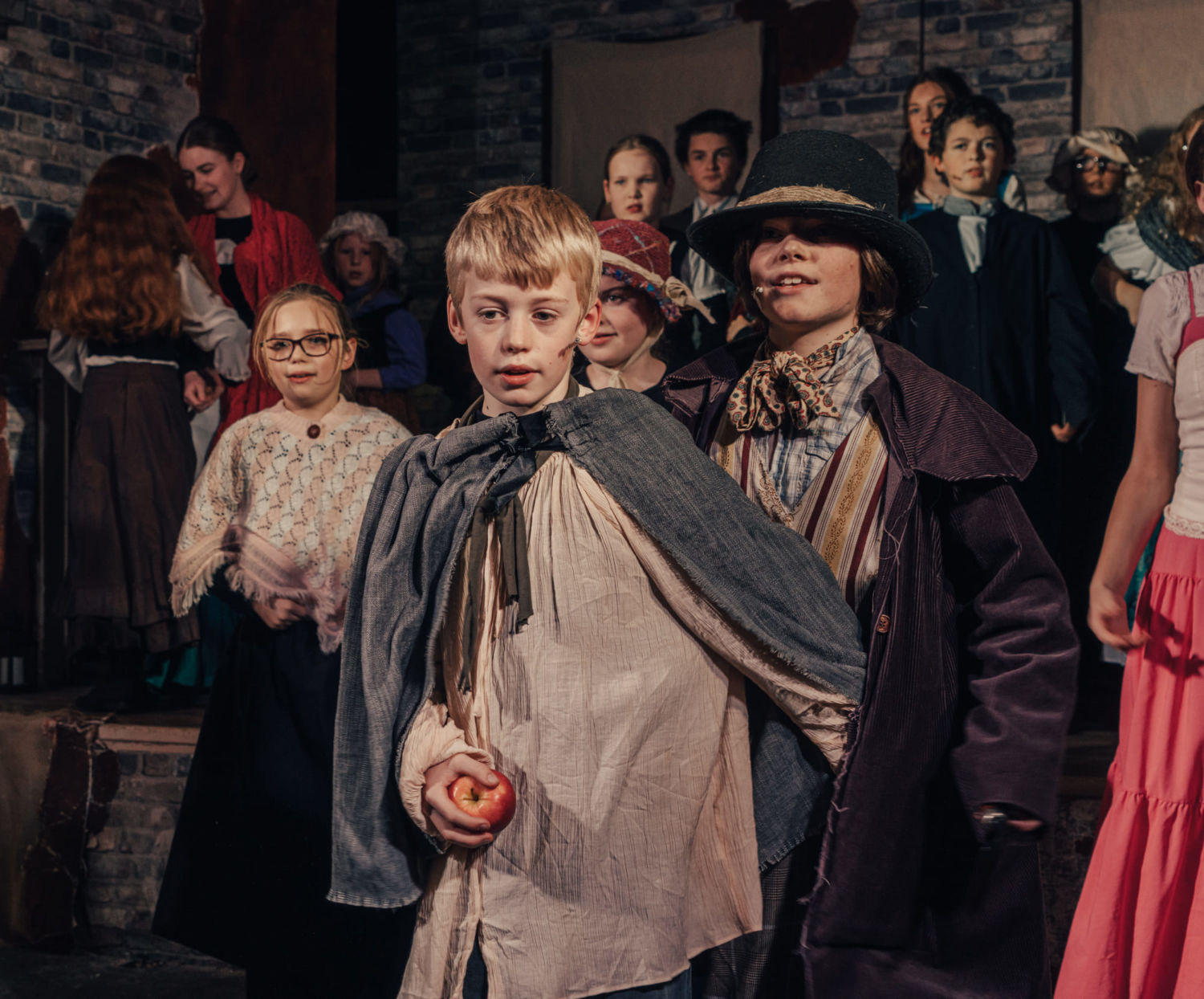 Aidan Lawlor as Oliver and Arthur Rogers as Dodger in Oliver!

Martine Rogers’ Stage Coach Theatre School showcased their version of the Lionel Bart megahit ‘Oliver’ recently. Ever popular with audiences and performers because of Dickens’ world view of quirky, interesting characters that evoke the strongest of reactions, ‘Oliver’ never fails to entertain.

Everything that’s good about amateur theatre is here on a twinkly, frosty Sunday afternoon in Stradbally. There’s an amazingly realistic set with three levels and several exits to facilitate a huge cast of orphans, town-dwellers, servants and thieves, all overlooked by a gloomy, grey wash of poverty and injustice. And let’s not forget that Dickens’ main purpose in writing Oliver Twist was to highlight the violence and injustice perpetrated on vulnerable young children in a wealthy state such as industrial England.

Casting the main parts in ‘Oliver’ is no easy task. So… hats off to Stage Coach Theatre for finding such a talented team. I loved the banter and the tension between Mr Bumble (Tom Rogers Snr) and his stage (and real) wife Widow Corney (Martine Rogers). Old Annie (Saoirse Kelly) and old Sally (Alannah Power), Charlotte (Lucy Power) and Noah Claypole (Jack Casey) all impressed throughout the matinee, while Mr and Mrs Brownlow (Emma-Louise Cleary and Richard Casey) were kindly and assertive grandparents.

Fagin and his gang always make the greatest impact in the musical. Numbers such as ‘Pick a pocket or two… Consider yourself… Reviewing the situation…  Be back soon…’ are on everyone’s lips as they exit the Barron Hall. Bertie Rogers is a devious, manipulative Fagin, who can never be put down, while Arthur Rogers is the best of artful Dodgers – funny, mischievous and a future Fagin in the making.

Tom A Rogers is an intimidating Bill Sykes who terrifies all and sundry as the out-of-control villain who is willing to rob and murder to get what he wants. Polly Rogers’ Nancy is the earthy, survivor who loves Bill and her “As long as he needs me” is a real show-stopper, while Caoimhe O’Reilly’s Bet convinces as her true friend.

Ensemble work is strong throughout and the “Who will buy” quartet of Gráinne Dowling, Éva Bray O’Sullivan and Tom A Rogers is a burst of sunshine in a show where little sunlight appears.

The Stage Coach Theatre School is inspired by Martine Rogers and her family, who are everywhere in this production. Martine directs with authority and no small spark of invention when dealing with a huge cast that all come from in and around Stradbally. Sets, costumes, hairs and make-up are all generated from the Stage Coach engine room and their connection with the Stradbally community is a joy. Who wouldn’t be proud of such an achievement.

My final word goes to the excellent Aidan Lawlor in the title role of Oliver. Aidan has that wonderful quality of vulnerability along with an open, expressive, acting style that make us realise that there is so much more to this young boy than anyone realises – other than Nancy.

Yet another quality production from Stage Coach Theatre.

Bertie Rogers as Fagan in Oliver! 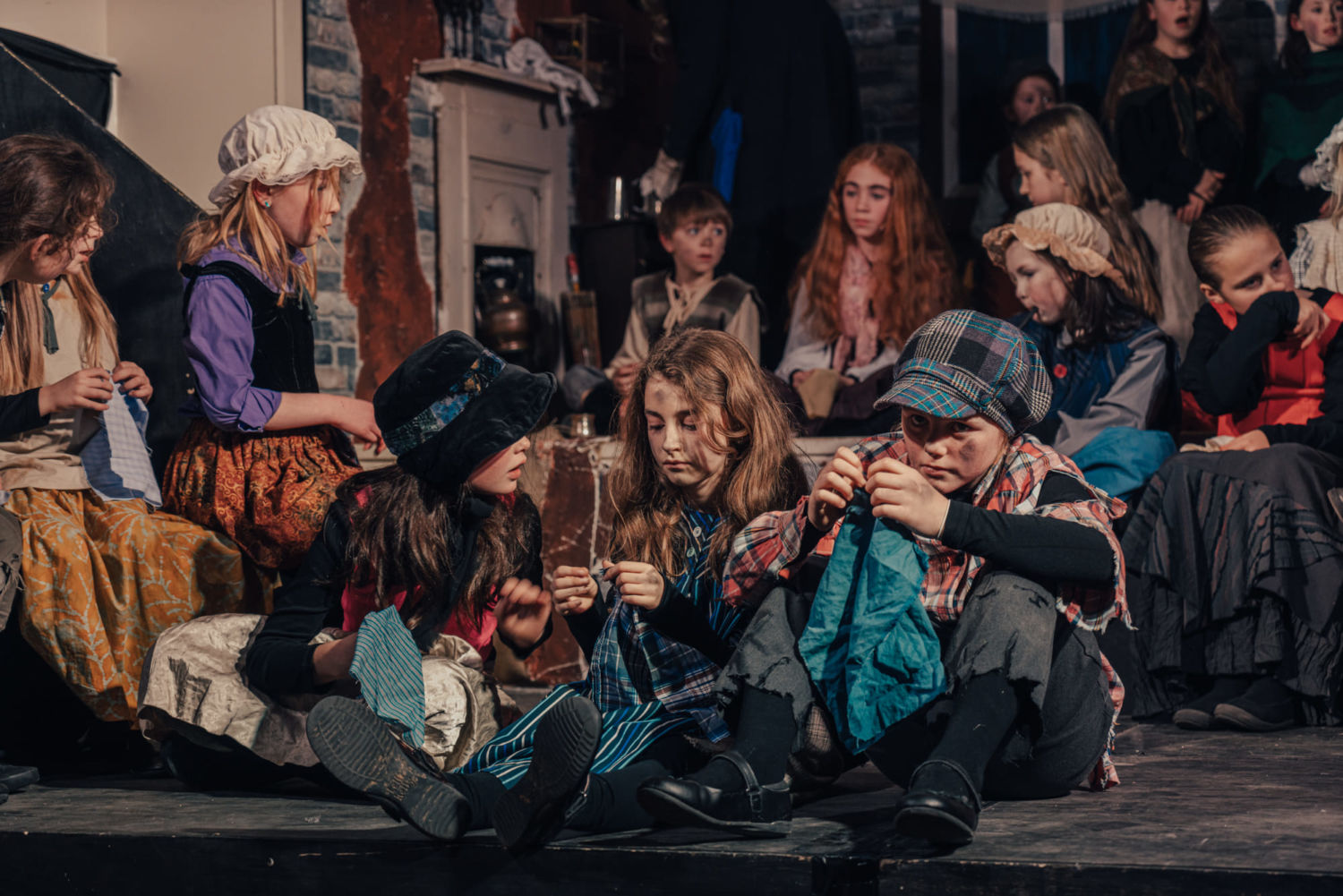 Fagan’s gang at the Barron Hall in Stradbally. 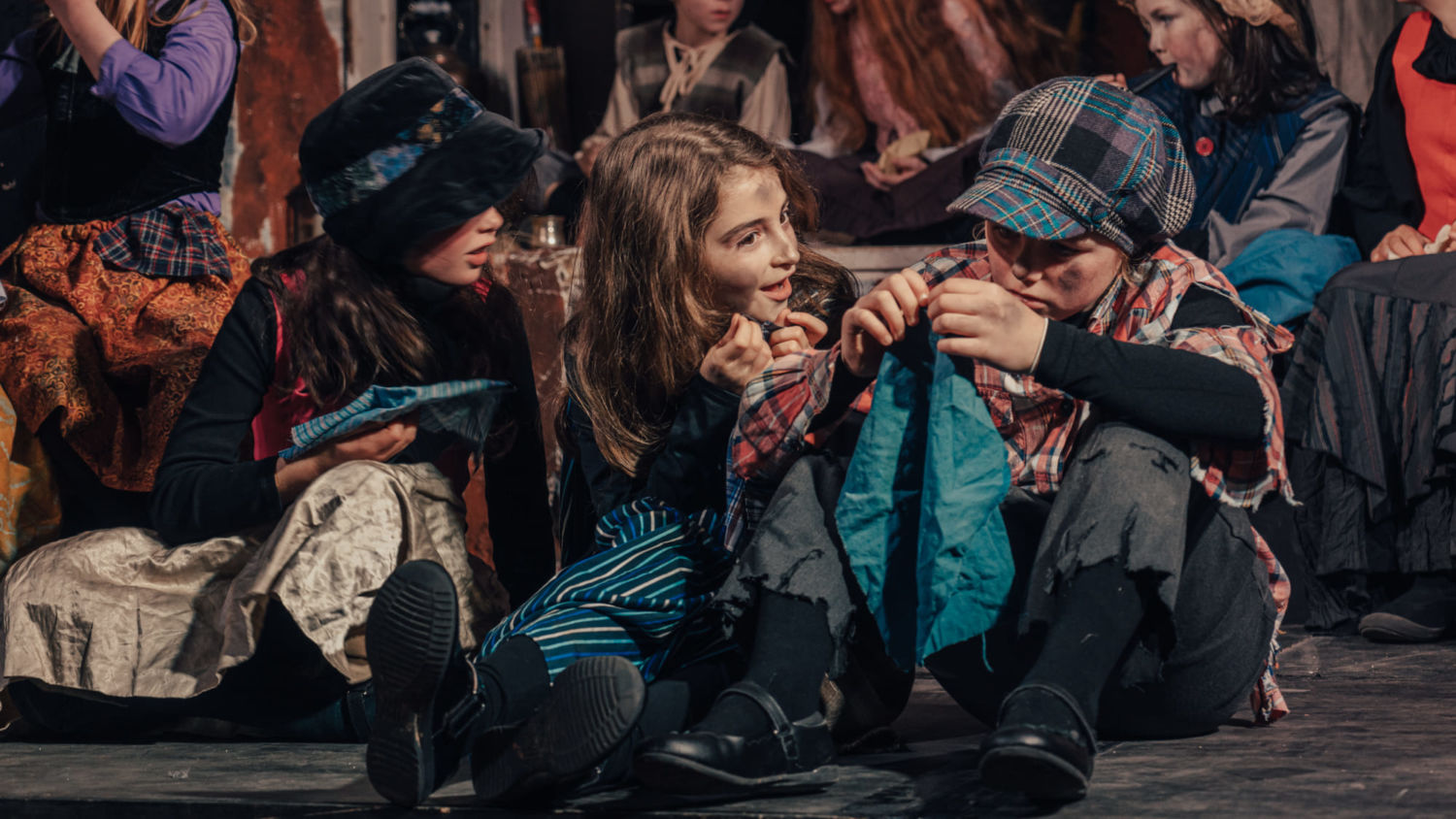 How to pick a pocket or two.