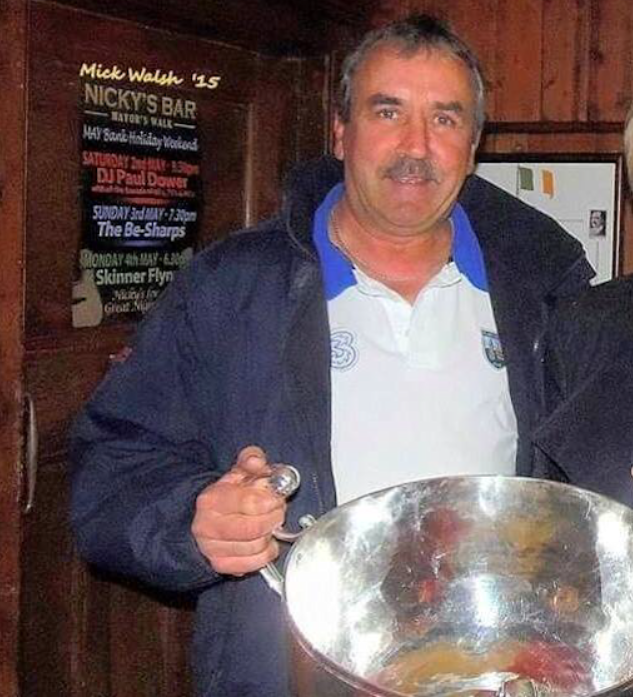 Saturday last saw Albert Burke’s final journey to his home village of Touraneena where he was laid to rest where it all began for a sportsman who, if he never really hit the high spots on the inter county scene, certainly left his mark on the sporting landscape of his native county as an athlete, a hurler and a footballer wherever his journey through life took him.
Albert (pictured above with the National Hurling League cup) died peacefully at home in The Folly with his loved ones by his side in his mid sixties after an illness bravely borne and his passing will have stirred memories throughout the county of a talented sportsman who loved life and playing the game wherever he found it.
For Albert Burke it all began with the winning of the U-18 County Sprint Championship at the Sliabh gCua Sports in John Kirwan Park in 1973 and that same year, as Touraneena had no minor team, Albert and a few others assisted neighbours Fourmilewater to a rare County Minor title, coming through the Western Championship to score a great County Final win over a strong Erins Own side in Walsh Park. It was Albert’s first county medal but certainly not his last at the age of sixteen.
Moving into adulthood Albert was a serious player for the St. Marys/Sliabh gCua Touraneena club and in 1978, on a talented St. Marys side blessed with talented players such as Ned Power, John Dalton, Tom Condon and the Fitzpatricks Albert stood out as the Western and county Junior Hurling titles were brought home to Tourneena. A year later Sliabh gCua captured the Western Junior Football title but lost out narrowly to Fenor in the county decider while in Intermediate Hurling St. Marys beat neighbours Fourmilewater in the Western final but lost out to their neighbours when the sides met again in the county final, a game in which Albert Burke was noted as one of the star players. The Touraneena club continued to contest the big games at Junior and Intermediate level, winning the Western Junior Football title in 1980 but again losing out in the county final to Roanmore but in Intermediate hurling St. Mary’s took the county title with a sensational 2-16 to 3-10 win over Dungarvan with Albert Burke giving an outstanding performance in midfield.
Around that time Touraneena was also famous for its achievements at Scor with Monnie Hallahan’s set dancers going on to achieve fame as All Ireland winners and it was no surprise that Albert, always an entertainer, was called up to join the group as they went on to All Ireland glory for the third time in 1980.

SUCCESS WITH SEVERAL CLUBS
It was around this time that Albert’s work as a tradesman saw him setting out on his travels throughout the county, a journey that was to bring him to many clubs and places where he always made his mark and left great memories.
Albert’s first port of call was to Abbeyside/Ballinacourty where his spectacular goal steered Ballinacourty to a third senior title in four years with victory over Ardmore. It was Albert’s first senior championship medal. After two years Albert returned to Touraneena and in 1983 St. Marys went all the way to Western and county Intermediate championship glory, defeating Ballygunner in the county final.
In 1985 the restless Albert moved on again this time to Kilrossanty where he collected his second senior football medal in 1985 as a member of the squad that defeated Tramore in the county final. It was on then to Portlaw for two years in 1987 and 1988 where he won a Sargent Cup medal. The big move in Albert’s career came in 1989 when he joined Roanmore and played a leading role as a midfielder in the club’s two senior hurling championship wins over Ballyduff in Walsh Park and Fraher Field while winning the ‘Man of the Match’ award in the 1989 final.
At the end of his playing days Albert Burke continued to contribute to the GAA club scene in Waterford, training St. Mary’s and Dunhill as well as training Erins Own to an Eastern Intermediate title before losing out to one of his former clubs Abbeyside in a great county final.

ST. JOSEPHS STALWART
Albert Burke finished his career with a collection of championship medals with various clubs that few could equal. His journey throughout Waterford could compare to the GAA’s equivalent of Homer’s Odyssey. While in the city he even found time to display his football skills with the local St. Josephs F.C. and was a driving force with that club, on and off the field, for over 30 years.
A great entertainer and a great character who will be sadly missed by all with whom he came into contact. It is only fitting that he was laid to rest in his native Touraneena where it all began for him.
To his partner Toni and the entire Burke family goes the sympathy and best wishes of a wide community on Albert’s passing. 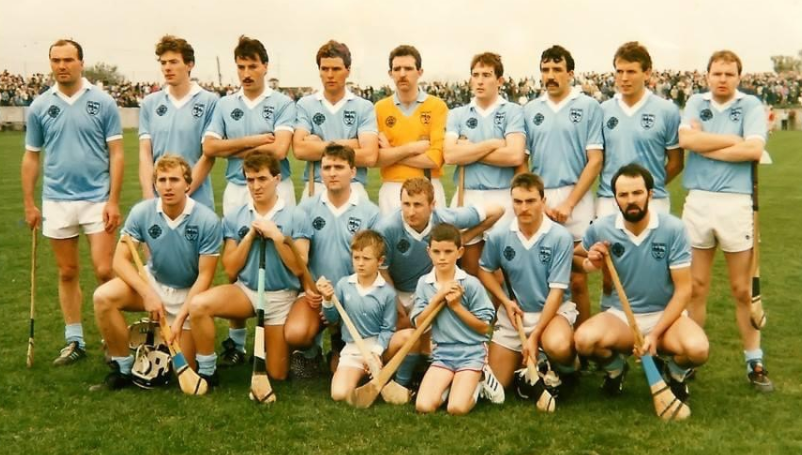 Albert Burke, third from right in the back row, before one of Roanmore’s County Senior Hurling Final wins.