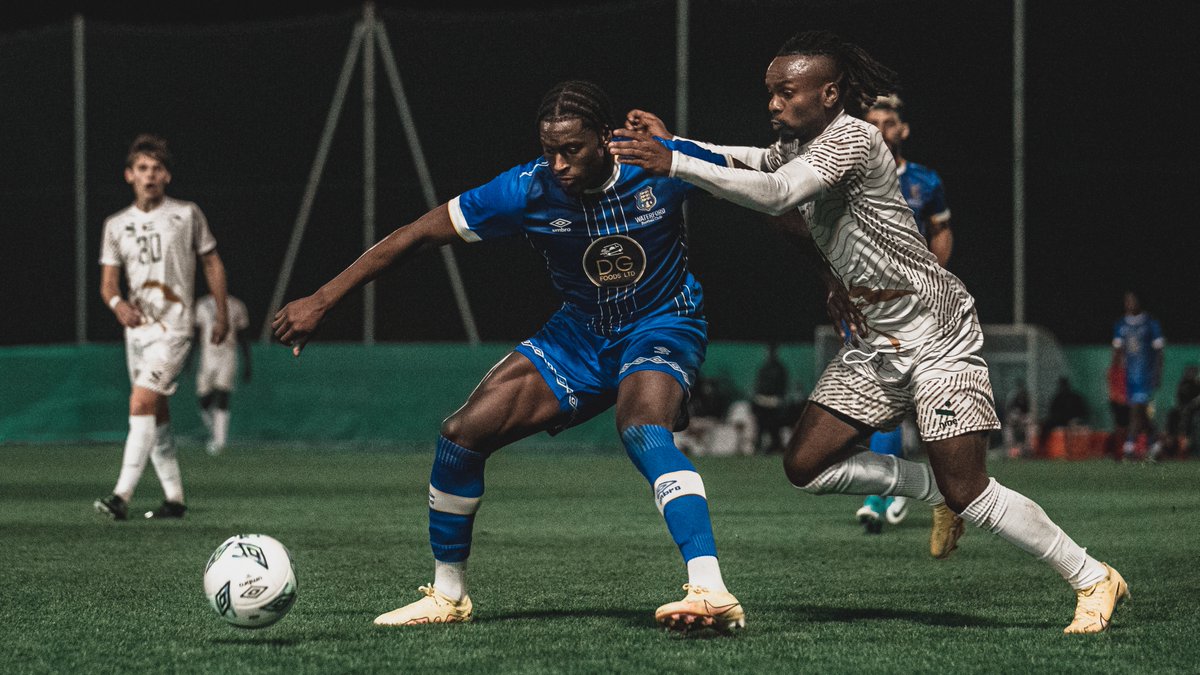 Waterford FC defender Tunmise Sobowale tries to hold off the challenge of a Green Herons player during their pre-season friendly at the JA Sports Centre in Dubai. Photo: Sam Fielding.

Waterford FC made light work of their first game of their pre-season tour of Dubai on Tuesday afternoon as Danny Searle’s side beat United Arab Emirates third division side The Green Herons at the JA Sports Centre claiming a 5-2 win.

The Blues, who made the trip to Dubai from Dublin on Sunday night last, had their first training session in sunnier climates on Monday before the game with their hosts giving Searle the chance to get more minutes into the legs.

After wins over Tramore AFC and Midleton ahead of the trip to the UAE, the tour to Dubai was an ideal opportunity for more team bonding ahead of the season opener against Wexford FC, which is due to be played at Ferrycarrig Park on Friday, February 16.

This clash against the Green Herons was less than a minute old when the Blues took the lead when a teasing ball into the penalty area from the right, and a touch off the opposition defender saw the ball end up in the back of the net.

With Thomas Oluwa having a shot saved by the host keeper soon afterwards, it was on-loan Fleetwood player Barry Baggley who went close to doubling the lead on 15 minutes when he cracked in a shot from 25-yards, but the ball flashed wide of the target.

After Paul Martin thwarted a half chance for the Green Herons, the Blues doubled the lead on 18 minutes when Roland Idowu was on hand to finish inside the penalty area, before Connor Parsons added a third goal three minutes before exiting the game soon afterwards when he finished from an acute angle.

Manager Danny Searle made a number of changes at the break that included a trialist from the UAE, and it was Wassim Aouachria that grabbed a fourth goal on 56 minutes when he took a pass from Thomas Oluwa, who had beat the offside trap, to turn provider for his striking partner, and he applied the finish.

The Green Herons did get two consolation goals in the second-half before Waterford completed the scoring on 77 minutes when Giles Phillips, who came on in the midway period of the second-half, headed home a quality delivery from Roland Idowu.