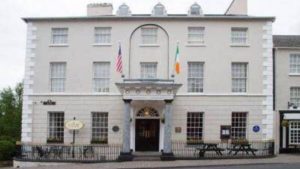 Lismore House Hotel, one of the oldest hotels in Ireland, is set to become a direct provision centre in the coming weeks.

The hotel, which was built in 1797, has been closed since 2016. It was purchased by a Cork-based company, MCHT, two years ago, but intentions to reopen the premises as a hotel were recently withdrawn.

It’s understood that 60 people will initially be accommodated at the hotel, with that number potentially rising to over 100 after first arrivals come in the first two weeks of February.

“My understanding is that 60 people are coming initially, made up of women and families and 12 staff will be employed,” local Labour Councillor, John Pratt told WLR FM.

Local councillors met with Superintendent Michael Lacey of Dungarvan Garda Station on Friday, and they were then made aware of the plans.

Locals have expressed disappointment that the hotel will not reopen under its former purpose, and whilst hopeful that the people in the area will welcome those living in direct provision – Cllr. Pratt also bemoaned the loss of the hotel.

“I think Lismore will be welcoming, but it is disappointing that the hotel won’t be in use for the foreseeable future – however long that might be. Lismore being a heritage town, it would have been good to see it reopening. Even if it was just for something that might have been on in any of the small local towns, it could have provided accommodation.”

A small group gathered outside the premises with anti-refugee signage on Saturday evening, and they were then met in turn by a larger group who came in support of the news.

“Some people are nervous,” conceded Cllr. Pratt, who has called for more Gardaí in Lismore to help deal with any incidents which could potentially arise.

“There is a nervousness around because it’s a big change. It’s a big number of people and it’s in the centre of the town. There will more than likely be no issues. There was a small gathering there – I think it was about four or five people, but there were about 15 people who came on the opposite side. The four or five that did arrive didn’t necessarily say that it was anything to do with the hotel, but the timing of it was strange. They had more signs than people to be honest. I went over there to show that the people of Lismore are welcoming. They are not against what’s happening. There is a disappointment that the hotel is going to be out of action though, there’s no doubt about that.”

People’s Park Fountain set to be refurbished by summer