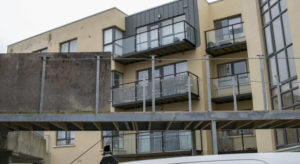 Waterford Council came in for criticism at this month’s Metropolitan District meeting of the local authority as the issue of unsafe living conditions at the Mount Suir apartment complex in Gracedieu.

Residents have highlighted issues with mould and moisture retention in their apartments in recent months, which has led to a tender being issued by Waterford Council to commence roof works at the site.

It’s believed that the works will cost Waterford Council at least €100,000 to undertake, and Cllr. Séamus Ryan (Labour) has called for an immediate assessment of all 18 apartments in Block C.

“I’ve been up at the apartments in Mount Suir recently and meeting with residents”, said Cllr. Ryan.

“I know that Cllr. Jim Griffin and Cllr. Joe Kelly have been doing this also. What’s happening up there is very serious. I want to request that an assessment would be carried out on each of the 18 apartments immediately. A schedule of works for each apartment should be drawn up so that the residents know that the work is going to take place. This has been going on for the last few years, and very little – if any work – has taken place for those residents. It needs to receive urgent attention on account of the seriousness of the issue. This is not just about mould on walls. This is water streaming in, it’s coming down through electric fittings in the ceilings. It is very very dangerous. I do want to stress that. I’ve spoken to housing officials on this, but I want to see an immediate assessment of each apartment.”

Cllr. Ryan’s sentiments were echoed by Independent Councillor Donal Barry, who requested a detailed report into findings from the local authority’s engineers, while also questioning just how much money would be spent on alleviating the issues.

Cllr. Barry referred to a recent interview on WLR FM where it was confirmed by Waterford Council’s housing team that a tender had been issued for repair works, and he said the public have a right to know how their taxes are being spent.

“I understand that the roof has been investigated by a roofing specialist, who said there are no leaks,” outlined Cllr. Barry.

“The Council’s engineers who investigated it have reported the same. We are now informed that a six-figure sum will be spent on part of a roof that has no leaks. I think we need to see a full report on what were found to be the problems, how its going to be redressed and the guarantees with this work going forward. We could be creating further problems by doing a costly patch-up job. When the Council decided to purchase that apartment complex, did they have it assessed by a structural engineer and did the Council’s engineers examine it? I’m finding it very hard to understand that we’re spending a six-figure sum on a roof that’s not leaking. What I certainly want to know and what taxpayers deserve to know, is how much exactly is going to be spent on this repair work. A six figure sum can be anywhere from €100,000 to €999,000. We need to know how much this is going to cost and a complete and detailed report to see what went wrong and to ensure that it never happens again.”

Speaking in response to the concerns, Senior Executive Officer for Housing at Waterford Council, Claire Hartley, noted that she would bring back the points noted by both councillors to the relevant directors – a response which was deemed unsatisfactory by Cllr. Ryan.

“These queries aren’t my area of expertise,” said Ms. Hartley. “In regard to the request for an inspection of the 18 apartments and a schedule of works to be undertaken – I’ll bring that back to the Senior Engineer. On Cllr. Barry’s request for a detailed report on the conditions survey when we purchased Block C and the costs that the works are going to amount to, we haven’t gone out to tender yet so we have an indicative cost.”

“It was obvious that this issue was coming up here today and there should have been a response”, said Cllr. Ryan. “I’m not having a go at Claire, but the housing office knew that this was a hot topic and residents are calling out for answers. It should have been the case that someone would have been here to answer the questions.”

People’s Park Fountain set to be refurbished by summer